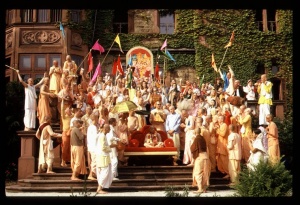 The Supersoul, the Supreme Personality of Godhead, Śrī Kṛṣṇa, the cause of the cosmic manifestation, appeared in the dynasty of Yadu. Please tell me elaborately about His glorious activities and character, from the beginning to the end of His life.

In this verse the words kṛtavān yāni indicate that all the different activities Kṛṣṇa performed while present on earth are beneficial to human society. If religionists, philosophers and people in general simply hear the activities of Kṛṣṇa, they will be liberated. We have described several times that there are two kinds of kṛṣṇa-kathā, represented by Bhagavad-gītā, spoken personally by Kṛṣṇa about Himself, and Śrīmad-Bhāgavatam, spoken by Śukadeva Gosvāmī about the glories of Kṛṣṇa. Anyone who becomes even slightly interested in kṛṣṇa-kathā is liberated. Kīrtanād eva kṛṣṇasya mukta-saṅgaḥ paraṁ vrajet (SB 12.3.51). Simply by chanting or repeating kṛṣṇa-kathā, one is liberated from the contamination of Kali-yuga. Caitanya Mahāprabhu therefore advised, yāre dekha, tāre kaha 'kṛṣṇa'-upadeśa (CC Madhya 7.128). This is the mission of Kṛṣṇa consciousness: to hear about Kṛṣṇa and thus be liberated from material bondage.