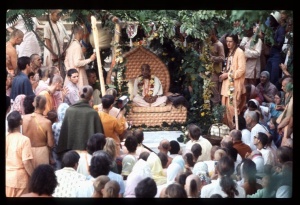 Śrī Kṛṣṇa is the intimate friend of Arjuna. He has appeared on this earth in His transcendental body, which resembles the bluish color of the tamāla tree. His body attracts everyone in the three planetary systems [upper, middle and lower]. May His glittering yellow dress and His lotus face, covered with paintings of sandalwood pulp, be the object of my attraction, and may I not desire fruitive results.

When Śrī Kṛṣṇa by His own internal pleasure appears on earth, He does so by the agency of His internal potency. The attractive features of His transcendental body are desired in all the three worlds, namely the upper, middle and lower planetary systems. Nowhere in the universe are there such beautiful bodily features as those of Lord Kṛṣṇa. Therefore His transcendental body has nothing to do with anything materially created. Arjuna is described here as the conqueror, and Kṛṣṇa is described as his intimate friend. Bhīṣmadeva, on his bed of arrows after the Battle of Kurukṣetra, is remembering the particular dress of Lord Kṛṣṇa which He put on as the driver of Arjuna's chariot. While fighting was going on between Arjuna and Bhīṣma, Bhīṣma's attraction was drawn by the glittering dress of Kṛṣṇa, and indirectly he admired his so-called enemy Arjuna for possessing the Lord as his friend. Arjuna was always a conqueror because the Lord was his friend. Bhīṣmadeva takes this opportunity to address the Lord as vijaya-sakhe (friend of Arjuna) because the Lord is pleased when He is addressed conjointly with His devotees, who are related with Him in different transcendental humors. While Kṛṣṇa was the charioteer of Arjuna, sun rays glittered on the dress of the Lord, and the beautiful hue created by the reflection of such rays was never forgotten by Bhīṣmadeva. As a great fighter he was relishing the relation of Kṛṣṇa in the chivalrous humor. Transcendental relation with the Lord in any one of the different rasas (humors) is relishable by the respective devotees in the highest ecstasy. Less intelligent mundaners who want to make a show of being transcendentally related with the Lord artificially jump at once to the relation of conjugal love, imitating the damsels of Vrajadhāma. Such a cheap relation with the Lord exhibits only the base mentality of the mundaner because one who has relished conjugal humor with the Lord cannot be attached to worldly conjugal rasa, which is condemned even by mundane ethics. The eternal relation of a particular soul with the Lord is evolved. A genuine relation of the living being with the Supreme Lord can take any form out of the five principal rasas, and it does not make any difference in transcendental degree to the genuine devotee. Bhīṣmadeva is a concrete example of this, and it should be carefully observed how the great general is transcendentally related with the Lord.