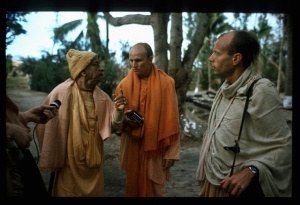 King Yudhiṣṭhira said: O my lot! I am the most sinful man! Just see my heart, which is full of ignorance! This body, which is ultimately meant for others, has killed many, many phalanxes of men.

A solid phalanx of 21,870 chariots, 21,870 elephants, 109,650 infantry and 65,600 cavalry is called an akṣauhiṇī. And many akṣauhiṇīs were killed on the Battlefield of Kurukṣetra. Mahārāja Yudhiṣṭhira, as the most pious king of the world, takes for himself the responsibility for killing such a huge number of living beings because the battle was fought to reinstate him on the throne. This body is, after all, meant for others. While there is life in the body, it is meant for the service of others, and when it is dead it is meant to be eaten by dogs and jackals or maggots. He is sorry because for such a temporary body such a huge massacre was committed.