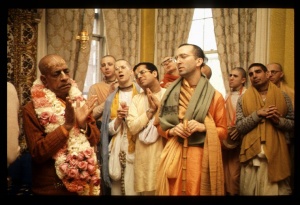 The Supreme Personality of Godhead said: Know from Me that this is the act of the son of Droṇa. He has thrown the hymns of nuclear energy [brahmāstra], and he does not know how to retract the glare. He has helplessly done this, being afraid of imminent death.

The brahmāstra is similar to the modern nuclear weapon manipulated by atomic energy. The atomic energy works wholly on total combustibility, and so the brahmāstra also acts. It creates an intolerable heat similar to atomic radiation, but the difference is that the atomic bomb is a gross type of nuclear weapon, whereas the brahmāstra is a subtle type of weapon produced by chanting hymns. It is a different science, and in the days gone by such science was cultivated in the land of Bhārata-varṣa. The subtle science of chanting hymns is also material, but it has yet to be known by the modern material scientists. Subtle material science is not spiritual, but it has a direct relationship with the spiritual method, which is still subtler. A chanter of hymns knew how to apply the weapon as well as how to retract it. That was perfect knowledge. But the son of Droṇācārya, who made use of this subtle science, did not know how to retract. He applied it, being afraid of his imminent death, and thus the practice was not only improper but also irreligious. As the son of a brāhmaṇa, he should not have made so many mistakes, and for such gross negligence of duty he was to be punished by the Lord Himself.