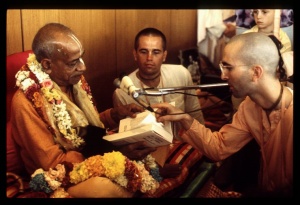 The duration of a day in the life of Brahmā is 4,320,000,000 solar years. This is stated also in the [[Bhagavad-gita As It Is (1972)|Bhagavad-gītā]. So for this period Brahmājī rests in yoga-nidrā within the body of the Garbhodakaśāyī Viṣṇu, the generator of Brahmā. Thus after the sleeping period of Brahmā, when there is again creation by the will of the Lord through the agency of Brahmā, all the great ṛṣis again appear from different parts of the transcendental body, and Nārada also appears. This means that Nārada appears in the same transcendental body, just as a man awakes from sleep in the same body. Śrī Nārada is eternally free to move in all parts of the transcendental and material creations of the Almighty. He appears and disappears in his own transcendental body, which is without distinction of body and soul, unlike conditioned beings.