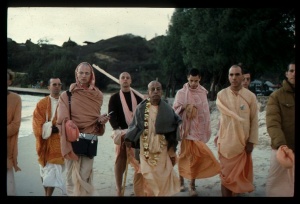 Sūta Gosvāmī said: Thus the sage amongst the gods [Nārada], comfortably seated and apparently smiling, addressed the ṛṣi amongst the brāhmaṇas [Vedavyāsa].

Nārada was smiling because he well knew the great sage Vedavyāsa and the cause of his disappointment. As he will explain gradually, Vyāsadeva's disappointment was due to insufficiency in presenting the science of devotional service. Nārada knew the defect, and it was confirmed by the position of Vyāsa.