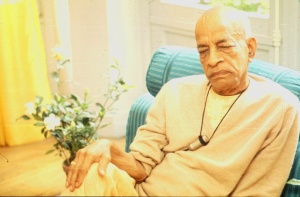 Then, in the beginning of Kali-yuga, the Lord will appear as Lord Buddha, the son of Añjanā, in the province of Gayā, just for the purpose of deluding those who are envious of the faithful theist.

Lord Buddha, a powerful incarnation of the Personality of Godhead, appeared in the province of Gayā (Bihar) as the son of Añjanā, and he preached his own conception of nonviolence and deprecated even the animal sacrifices sanctioned in the Vedas. At the time when Lord Buddha appeared, the people in general were atheistic and preferred animal flesh to anything else. On the plea of Vedic sacrifice, every place was practically turned into a slaughterhouse, and animal-killing was indulged in unrestrictedly. Lord Buddha preached nonviolence, taking pity on the poor animals. He preached that he did not believe in the tenets of the Vedas and stressed the adverse psychological effects incurred by animal-killing. Less intelligent men of the age of Kali, who had no faith in God, followed his principle, and for the time being they were trained in moral discipline and nonviolence, the preliminary steps for proceeding further on the path of God realization. He deluded the atheists because such atheists who followed his principles did not believe in God, but they kept their absolute faith in Lord Buddha, who himself was the incarnation of God. Thus the faithless people were made to believe in God in the form of Lord Buddha. That was the mercy of Lord Buddha: he made the faithless faithful to him.

Killing of animals before the advent of Lord Buddha was the most prominent feature of the society. People claimed that these were Vedic sacrifices. When the Vedas are not accepted through the authoritative disciplic succession, the casual readers of the Vedas are misled by the flowery language of that system of knowledge. In the Bhagavad-gītā a comment has been made on such foolish scholars (avipaścitaḥ). The foolish scholars of Vedic literature who do not care to receive the transcendental message through the transcendental realized sources of disciplic succession are sure to be bewildered. To them, the ritualistic ceremonies are considered to be all in all. They have no depth of knowledge. According to the Bhagavad-gītā (BG 15.15), vedaiś ca sarvair aham eva vedyaḥ: the whole system of the Vedas is to lead one gradually to the path of the Supreme Lord. The whole theme of Vedic literature is to know the Supreme Lord, the individual soul, the cosmic situation and the relation between all these items. When the relation is known, the relative function begins, and as a result of such a function the ultimate goal of life or going back to Godhead takes place in the easiest manner. Unfortunately, unauthorized scholars of the Vedas become captivated by the purificatory ceremonies only, and natural progress is thereby checked.

To such bewildered persons of atheistic propensity, Lord Buddha is the emblem of theism. He therefore first of all wanted to check the habit of animal-killing. The animal-killers are dangerous elements on the path going back to Godhead. There are two types of animal-killers. The soul is also sometimes called the "animal" or the living being. Therefore, both the slaughterer of animals and those who have lost their identity of soul are animal-killers.

Mahārāja Parīkṣit said that only the animal-killer cannot relish the transcendental message of the Supreme Lord. Therefore if people are to be educated to the path of Godhead, they must be taught first and foremost to stop the process of animal-killing as above mentioned. It is nonsensical to say that animal-killing has nothing to do with spiritual realization. By this dangerous theory many so-called sannyāsīs have sprung up by the grace of Kali-yuga who preach animal-killing under the garb of the Vedas. The subject matter has already been discussed in the conversation between Lord Caitanya and Maulana Chand Kazi Shaheb. The animal sacrifice as stated in the Vedas is different from the unrestricted animal-killing in the slaughterhouse. Because the asuras or the so-called scholars of Vedic literatures put forward the evidence of animal-killing in the Vedas, Lord Buddha superficially denied the authority of the Vedas. This rejection of the Vedas by Lord Buddha was adopted in order to save people from the vice of animal-killing as well as to save the poor animals from the slaughtering process of their big brothers who clamor for universal brotherhood, peace, justice and equity. There is no justice when there is animal-killing. Lord Buddha wanted to stop it completely, and therefore his cult of ahiṁsā was propagated not only in India but also outside the country.

Technically Lord Buddha's philosophy is called atheistic because there is no acceptance of the Supreme Lord and because that system of philosophy denied the authority of the Vedas. But that is an act of camouflage by the Lord. Lord Buddha is the incarnation of Godhead. As such, he is the original propounder of Vedic knowledge. He therefore cannot reject Vedic philosophy. But he rejected it outwardly because the sura-dviṣa, or the demons who are always envious of the devotees of Godhead, try to support cow-killing or animal-killing from the pages of the Vedas, and this is now being done by the modernized sannyāsīs. Lord Buddha had to reject the authority of the Vedas altogether. This is simply technical, and had it not been so he would not have been so accepted as the incarnation of Godhead. Nor would he have been worshiped in the transcendental songs of the poet Jayadeva, who is a Vaiṣṇava ācārya. Lord Buddha preached the preliminary principles of the Vedas in a manner suitable for the time being (and so also did Śaṅkarācārya) to establish the authority of the Vedas. Therefore both Lord Buddha and Ācārya Śaṅkara paved the path of theism, and Vaiṣṇava ācāryas, specifically Lord Śrī Caitanya Mahāprabhu, led the people on the path towards a realization of going back to Godhead.

We are glad that people are taking interest in the nonviolent movement of Lord Buddha. But will they take the matter very seriously and close the animal slaughterhouses altogether? If not, there is no meaning to the ahiṁsā cult.

Śrīmad-Bhāgavatam was composed just prior to the beginning of the age of Kali (about five thousand years ago), and Lord Buddha appeared about twenty-six hundred years ago. Therefore in the Śrīmad-Bhāgavatam Lord Buddha is foretold. Such is the authority of this clear scripture. There are many such prophecies, and they are being fulfilled one after another. They will indicate the positive standing of Śrīmad-Bhāgavatam, which is without trace of mistake, illusion, cheating and imperfection, which are the four flaws of all conditioned souls. The liberated souls are above these flaws; therefore they can see and foretell things which are to take place on distant future dates.