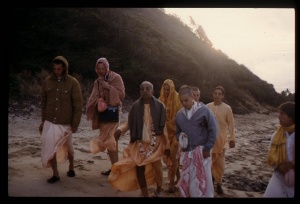 The transcendental Personality of Godhead is indirectly associated with the three modes of material nature, namely passion, goodness and ignorance, and just for the material world's creation, maintenance and destruction He accepts the three qualitative forms of Brahmā, Viṣṇu and Śiva. Of these three, all human beings can derive ultimate benefit from Viṣṇu, the form of the quality of goodness.

That Lord Śrī Kṛṣṇa, by His plenary parts, should be rendered devotional service, as explained above, is confirmed by this statement. Lord Śrī Kṛṣṇa and all His plenary parts are viṣṇu-tattva, or the Lordship of Godhead. From Śrī Kṛṣṇa, the next manifestation is Baladeva. From Baladeva is Saṅkarṣaṇa, from Saṅkarṣaṇa is Nārāyaṇa, from Nārāyaṇa there is the second Saṅkarṣaṇa, and from this Saṅkarṣaṇa the Viṣṇu puruṣa-avatāras. The Viṣṇu or the Deity of the quality of goodness in the material world is the puruṣa-avatāra known as Kṣīrodakaśāyī Viṣṇu or Paramātmā. Brahmā is the deity of rajas (passion), and Śiva of ignorance. They are the three departmental heads of the three qualities of this material world. Creation is made possible by the goodness of Viṣṇu, and when it requires to be destroyed, Lord Śiva does it by the tāṇḍavanṛtya. The materialists and the foolish human beings worship Brahmā and Śiva respectively. But the pure transcendentalists worship the form of goodness, Viṣṇu, in His various forms. Viṣṇu is manifested by His millions and billions of integrated forms and separated forms. The integrated forms are called Godhead, and the separated forms are called the living entities or the jīvas. Both the jīvas and Godhead have their original spiritual forms. jīvas are sometimes subjected to the control of material energy, but the Viṣṇu forms are always controllers of this energy. When Viṣṇu, the Personality of Godhead, appears in the material world, He comes to deliver the conditioned living beings who are under the material energy. Such living beings appear in the material world with intentions of being lords, and thus they become entrapped by the three modes of nature. As such, the living entities have to change their material coverings for undergoing different terms of imprisonment. The prison house of the material world is created by Brahmā under instruction of the Personality of Godhead, and at the conclusion of a kalpa the whole thing is destroyed by Śiva. But as far as maintenance of the prison house is concerned, it is done by Viṣṇu, as much as the state prison house is maintained by the state. Anyone, therefore, who wishes to get out of this prison house of material existence, which is full of miseries like repetition of birth, death, disease and old age, must please Lord Viṣṇu for such liberation. Lord Viṣṇu is worshiped by devotional service only, and if anyone has to continue prison life in the material world, he may ask for relative facilities for temporary relief from the different demigods like Śiva, Brahmā, Indra and Varuṇa. No demigod, however, can release the imprisoned living being from the conditioned life of material existence. This can be done only by Viṣṇu. Therefore, the ultimate benefit may be derived from Viṣṇu, the Personality of Godhead.