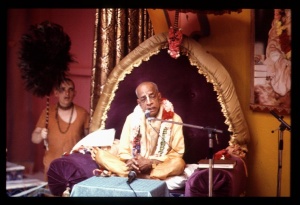 His collarbone was fleshy, his chest broad and thick, his navel deep and his abdomen beautifully striped. His arms were long, and curly hair was strewn over his beautiful face. He was naked, and the hue of his body reflected that of Lord Kṛṣṇa.

His bodily features indicate him to be different from common men. All the signs described in connection with the bodily features of Śukadeva Gosvāmī are uncommon symptoms, typical of great personalities, according to physiognomical calculations. His bodily hue resembled that of Lord Kṛṣṇa, who is the supreme among the gods, demigods and all living beings.