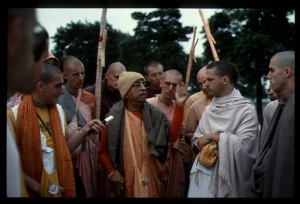 Sūta Gosvāmī said: Mahārāja Parīkṣit, thus being petitioned by the personality of Kali, gave him permission to reside in places where gambling, drinking, prostitution and animal slaughter were performed.

Śrīla Jīva Gosvāmī directs that drinking against the principles of scriptures, such as the sautrāmaṇī-yajña, association with women outside marriage, and killing animals against the injunctions of scriptures are irreligious. In the Vedas two different types of injunctions are there for the pravṛttas, or those who are engaged in material enjoyment, and for the nivṛttas, or those who are liberated from material bondage. The Vedic injunction for the pravṛttas is to gradually regulate their activities towards the path of liberation. Therefore, for those who are in the lowest stage of ignorance and who indulge in wine, women and flesh, drinking by performing sautrāmaṇī-yajña, association of women by marriage and flesh-eating by sacrifices are sometimes recommended. Such recommendations in the Vedic literature are meant for a particular class of men, and not for all. But because they are injunctions of the Vedas for particular types of persons, such activities by the pravṛttas are not considered adharma. One man's food may be poison for others; similarly, what is recommended for those in the mode of ignorance may be poison for those in the mode of goodness. Śrīla Jīva Gosvāmī Prabhu, therefore, affirms that recommendations in the scriptures for a certain class of men are never to be considered adharma, or irreligious. But such activities are factually adharma, and they are never to be encouraged. The recommendations in the scriptures are not meant for the encouragement of such adharma, but for regulating the necessary adharma gradually toward the path of dharma.

Following in the footsteps of Mahārāja Parīkṣit, it is the duty of all executive heads of states to see that the principles of religion, namely austerity, cleanliness, mercy and truthfulness, are established in the state, and that the principles of irreligion, namely pride, illicit female association or prostitution, intoxication and falsity, are checked by all means. And to make the best use of a bad bargain, the personality of Kali may be transferred to places of gambling, drinking, prostitution and slaughterhouses, if there are any places like that. Those who are addicted to these irreligious habits may be regulated by the injunctions of the scripture. In no circumstances should they be encouraged by any state. In other words, the state should categorically stop all sorts of gambling, drinking, prostitution and falsity. The state which wants to eradicate corruption by majority may introduce the principles of religion in the following manner:

Gambling of all description, even speculative business enterprise, is considered to be degrading, and when gambling is encouraged in the state, there is a complete disappearance of truthfulness. Allowing young boys and girls to remain unmarried more than the above-mentioned ages and licensing animal slaughterhouses of all description should be at once prohibited. The flesh-eaters may be allowed to take flesh as mentioned in the scriptures, and not otherwise. Intoxication of all description-even smoking cigarettes, chewing tobacco or the drinking of tea-must be prohibited.