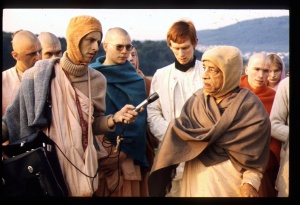 An upstart living being who commits offenses by torturing those who are offenseless shall be directly uprooted by me, even though he be a denizen of heaven with armor and decorations.

The denizens of the heavenly kingdom are called amara, or deathless, due to their possessing a long span of life, far greater than that of the human beings. For a human being, who has only a maximum one-hundred-year duration of life, a span of life spreading over millions of years is certainly considered to be deathless. For example, from the Bhagavad-gītā we learn that on the Brahmaloka planet the duration of one day is calculated to be 4,300,000 x 1,000 solar years. Similarly, in other heavenly planets one day is calculated to be six months of this planet, and the inhabitants get a life of ten million of their years. Therefore, in all higher planets, since the span of life is far greater than that of the human being, the denizens are called deathless by imagination, although actually no one within the material universe is deathless.