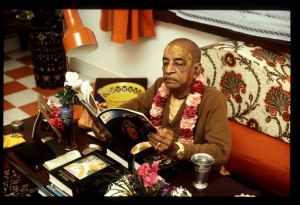 O chaste one, the king's good name, duration of life and good rebirth vanish when all kinds of living beings are terrified by miscreants in his kingdom. It is certainly the prime duty of the king to subdue first the sufferings of those who suffer. Therefore I must kill this most wretched man because he is violent against other living beings.

When there is some disturbance caused by wild animals in a village or town, the police or others take action to kill them. Similarly, it is the duty of the government to kill at once all bad social elements such as thieves, dacoits and murderers. The same punishment is also due to animal-killers because the animals of the state are also the prajā. Prajā means one who has taken birth in the state, and this includes both men and animals. Any living being who takes birth in a state has the primary right to live under the protection of the king. The jungle animals are also subject to the king, and they also have a right to live. So what to speak of domestic animals like the cows and bulls.

Any living being, if he terrifies other living beings, is a most wretched subject, and the king should at once kill such a disturbing element. As the wild animal is killed when it creates disturbances, similarly any man who unnecessarily kills or terrifies the jungle animals or other animals must be punished at once. By the law of the Supreme Lord, all living beings, in whatever shape they may be, are the sons of the Lord, and no one has any right to kill another animal, unless it is so ordered by the codes of natural law. The tiger can kill a lower animal for his subsistence, but a man cannot kill an animal for his subsistence. That is the law of God, who has created the law that a living being subsists by eating another living being. Thus the vegetarians are also living by eating other living beings. Therefore, the law is that one should live only by eating specific living beings, as ordained by the law of God. The Īśopaniṣad directs that one should live by the direction of the Lord and not at one's sweet will. A man can subsist on varieties of grains, fruits and milk ordained by God, and there is no need of animal food, save and except in particular cases.

The illusioned king or executive head, even though sometimes advertised as a great philosopher and learned scholar, will allow slaughterhouses in the state without knowing that torturing poor animals clears the way to hell for such foolish kings or executive heads. The executive head must always be alert to the safety of the prajās, both man and animal, and inquire whether a particular living being is harassed at any place by another living being. The harassing living being must at once be caught and put to death, as shown by Mahārāja Parīkṣit.

The people's government, or government by the people, should not allow killing of innocent animals by the sweet will of foolish government men. They must know the codes of God, as mentioned in the revealed scriptures. Mahārāja Parīkṣit quotes here that according to the codes of God the irresponsible king or state executive jeopardizes his good name, duration of life, power and strength and ultimately his progressive march towards a better life and salvation after death. Such foolish men do not even believe in the existence of a next life.

While commenting on this particular verse, we have in our presence the statement of a great modern politician who has recently died and left his will, which discloses his poor fund of knowledge of the codes of God mentioned by Mahārāja Parīkṣit. The politician was so ignorant of the codes of God that he writes: "I do not believe in any such ceremonies, and to submit to them, even as a matter of form, would be hypocrisy and an attempt to delude ourselves and others... I have no religious sentiment in the matter."

Contrasting these statements of a great politician in the modern age with those of Mahārāja Parīkṣit, we find a vast difference. Mahārāja Parīkṣit was pious according to the scriptural codes, whereas the modern politician goes by his personal belief and sentiments. Any great man of the material world is, after all, a conditioned soul. He is bound by his hands and feet by the ropes of material nature, and still the foolish conditioned soul thinks of himself as free to act by his whimsical sentiments. The conclusion is that people in the time of Mahārāja Parīkṣit were happy, and the animals were given proper protection because the executive head was not whimsical or ignorant of God's law. Foolish, faithless creatures try to avoid the existence of the Lord and proclaim themselves secular at the cost of valuable human life. The human life is especially meant for knowing the science of God, but foolish creatures, especially in this age of Kali, instead of knowing God scientifically, make propaganda against religious belief as well as the existence of God, even though they are always bound by the laws of God by the symptoms of birth, death, old age and disease.