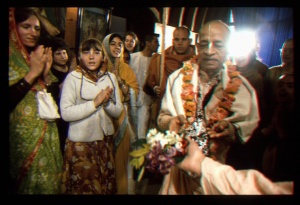 The original Personality of Godhead, the enjoyer, and Balarāma, the primeval Lord Ananta, are staying in the ocean of the Yadu dynasty for the welfare, protection and general progress of the entire universe. And the members of the Yadu dynasty, being protected by the arms of the Lord, are enjoying life like the residents of the spiritual sky.

As we have discussed many times, the Personality of Godhead Viṣṇu resides within each and every universe in two capacities, namely as the Garbhodakaśāyī Viṣṇu and the Kṣīrodakaśāyī Viṣṇu. The Kṣīrodakaśāyī Viṣṇu has His own planet on the northern top of the universe, and there is a great ocean of milk where the Lord resides on the bed of the Ananta incarnation of Baladeva. Thus Mahārāja Yudhiṣṭhira has compared the Yadu dynasty to the ocean of milk and Śrī Balarāma to the Ananta where Lord Kṛṣṇa resides. He has compared the citizens of Dvārakā to the liberated inhabitants of the Vaikuṇṭhalokas. Beyond the material sky, further than we can see with our eyes and beyond the sevenfold coverings of the universe, there is the Causal Ocean in which all the universes are floating like footballs, and beyond the Causal Ocean there is an unlimited span of spiritual sky generally known as the effulgence of Brahman. Within this effulgence there are innumerable spiritual planets, and they are known as the Vaikuṇṭha planets. Each and every Vaikuṇṭha planet is many, many times bigger than the biggest universe within the material world, and in each of them there are innumerable inhabitants who look exactly like Lord Viṣṇu. These inhabitants are known as the Mahā-pauruṣikas, or persons directly engaged in the service of the Lord. They are happy in those planets and are without any kind of misery, and they live perpetually in full youthfulness, enjoying life in full bliss and knowledge without fear of birth, death, old age or disease, and without the influence of kāla, eternal time. Mahārāja Yudhiṣṭhira has compared the inhabitants of Dvārakā to the Mahā-pauruṣikas of Vaikuṇṭhaloka because they are so happy with the Lord. In the Bhagavad-gītā there are many references to the Vaikuṇṭhalokas, and they are mentioned there as mad-dhāma, or the kingdom of the Lord.