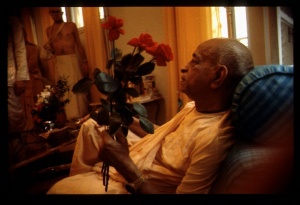 After asking various questions and becoming established in the transcendental loving service of Lord Kṛṣṇa, Vidura retired from putting questions to Maitreya Muni.

Vidura retired from putting questions before Maitreya Muni when he was convinced by Maitreya Ṛṣi that the summum bonum of life is to be finally situated in the transcendental loving service of Lord Śrī Kṛṣṇa, who is Govinda, or one who satisfies His devotees in all respects. The conditioned soul, the living being in material existence, seeks happiness by employing his senses in the modes of materialism, but that cannot give him satisfaction. He then searches after the Supreme Truth by the empiric philosophic speculative method and intellectual feats. But if he does not find the ultimate goal, he again goes down to material activities and engages himself in various philanthropic and altruistic works, which all fail to give him satisfaction. So neither fruitive activities nor dry philosophical speculation can give one satisfaction because by nature a living being is the eternal servitor of the Supreme Lord Śrī Kṛṣṇa, and all the Vedic literatures give him direction towards that ultimate end. The Bhagavad-gītā (BG 15.15) confirms this statement.