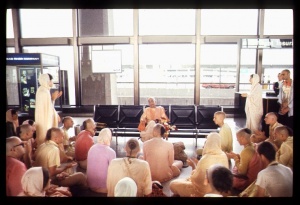 Please, therefore, leave for the North immediately, without letting your relatives know, for soon that time will approach which will diminish the good qualities of men.

One can compensate for a life of frustration by becoming a dhīra, or leaving home for good without communicating with relatives, and Vidura advised his eldest brother to adopt this way without delay because very quickly the age of Kali was approaching. A conditioned soul is already degraded by the material association, and still in the Kali-yuga the good qualities of a man will deteriorate to the lowest standard. He was advised to leave home before Kali-yuga approached because the atmosphere which was created by Vidura, his valuable instructions on the facts of life, would fade away due to the influence of the age which was fast approaching. To become narottama, or a first-class human being depending completely on the Supreme Lord Śrī Kṛṣṇa, is not possible for any ordinary man. It is stated in Bhagavad-gītā (BG 7.28) that a person who is completely relieved of all taints of sinful acts can alone depend on the Supreme Lord Śrī Kṛṣṇa, the Personality of Godhead. Dhṛtarāṣṭra was advised by Vidura at least to become a dhīra in the beginning if it were impossible for him to become a sannyāsī or a narottama. Persistently endeavoring on the line of self-realization helps a person to rise to the conditions of a narottama from the stage of a dhīra. The dhīra stage is attained after prolonged practice of the yoga system, but by the grace of Vidura one can attain the stage immediately simply by willing to adopt the means of the dhīra stage, which is the preparatory stage for sannyāsa. The sannyāsa stage is the preparatory stage of paramahaṁsa, or the first-grade devotee of the Lord.