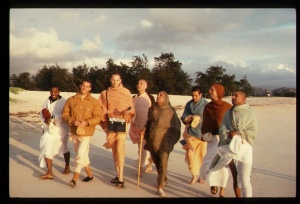 They said: Here He is, the original Personality of Godhead as we definitely remember Him. He alone existed before the manifested creation of the modes of nature, and in Him only, because He is the Supreme Lord, all living beings merge, as if sleeping at night, their energy suspended.

The material creation is effected by the interaction of the three modes of material nature set in action by the Lord, and therefore it is said here that the Lord existed before the modes of material nature were set in motion. In the Śruti-mantra it is said that only Viṣṇu, the Supreme Lord, existed before the creation, and there was no Brahmā, Śiva or other demigods. Viṣṇu means the Mahā-Viṣṇu, who is lying on the Causal Ocean. By His breathing only all the universes are generated in seeds and gradually develop into gigantic forms with innumerable planets within each and every universe. The seeds of universes develop into gigantic forms in the way seeds of a banyan tree develop into numberless banyan trees.

This Mahā-Viṣṇu is the plenary portion of the Lord Śrī Kṛṣṇa, who is mentioned in the Brahma-saṁhitā (BS 5.58) as follows:

"Let me offer my respectful obeisances unto the original Personality of Godhead, Govinda, whose plenary portion is the Mahā-Viṣṇu. All the Brahmās, the heads of the universes, live only for the period of His exhaling, after the universes are generated from the pores of His transcendental body."

The merging of the living beings into the body of Mahā-Viṣṇu takes place automatically at the end of Brahmā's one hundred years. But that does not mean that the individual living being loses his identity. The identity is there, and as soon as there is another creation by the supreme will of the Lord, all the sleeping, inactive living beings are again let loose to begin their activities in the continuation of past different spheres of life. It is called suptotthita naya, or awakening from sleep and again engaging in one's respective continuous duty. When a man is asleep at night, he forgets himself, what he is, what his duty is and everything of his waking state. But as soon as he awakens from slumber, he remembers all that he has to do and thus engages himself again in his prescribed activities. The living beings also remain merged in the body of Mahā-Viṣṇu during the period of annihilation, but as soon as there is another creation they arise to take up their unfinished work. This is also confirmed in the Bhagavad-gītā (BG 8.18-20).

The Lord existed before the creative energy was set in action. The Lord is not a product of the material energy. His body is completely spiritual, and there is no difference between His body and Himself. Before creation the Lord remained in His abode, which is absolute and one.