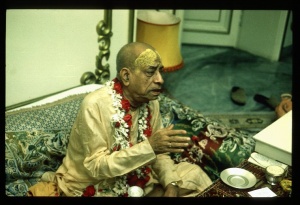 (Yogeśvara translates into French throughout)

French guest: I have a very good friend in India called Shri Krishna Prema. You have known him?

Prabhupāda: He was professor in Lucknow University. His name was Mr. Nixon.

Prabhupāda: He is the director of Indology in Moscow.

Prabhupāda: So my talk with was published in some . . .

Church Representative: Yes, I have this book in my office in Paris.

Prabhupāda: But he does not believe in incarnation, and he still, he is professor of Indology.

Church Representative: But I think that he is a Marxist.

Karandhara: Yes. He is a . . . or at least he has to appear as one to maintain his position. Prabhupāda's point is that . . .

Church Representative: There are many professor in Russia of religion, on the history of religion, but who don't believe in nothing.

Karandhara: That was Prabhupāda's point, that it's ironic that in modern societies men are called professors, or being proficient in knowledge, but yet they're ignorant of the soul, which is the most basic knowledge, the most fundamental knowledge. According to the Vedic system, Indian system, even a most ignorant man knows about the soul, what to speak of the great learned sages. But in this society, Western society, the so-called learned men—they're supposed to be the topmost learned men—they don't even know of the soul. Therefore they're not even in the class of an ignorant man. They're lower than even ignorance.

Prabhupāda: And according to Vedic understanding, one who does not understand what is soul—he identifies himself with this body—he is animal.

Church Representative: This is also a fundamental idea of Christian spirituality.

Prabhupāda: So in the Vedic language, one who has taken this body as self, yasyātma-buddhiḥ kuṇape tri-dhātuke (SB 10.84.13), and sva-dhīḥ kalatrādiṣu, and own men, the family, society, community, national—not outside that—sva-dhīḥ, "They are my own men." Sva-dhīḥ kalatrādiṣu bhauma-ijya-dhīḥ, and the land of birth worshipable, nationalism, yat-tīrtha-buddhiḥ salile na karhicit, and holy place, to take bath in the water of Jordan or Ganges, such persons are considered as go-kharaḥ. Go means cow; kharaḥ means ass. That means animals. What is your conception of the soul? Do you believe in the soul?

Church Representative: I understand. My conception of soul?

Church Representative: Could you precise your question, because what do you mean by this . . .

Church Representative: Yes, I know . . . I cannot say that I know what is soul. I know that there are souls, that I have a soul. But I think that it's very difficult to give adequate . . . (French)

Yogeśvara: He says he knows that he has a soul, but he thinks it would be hard to give an accurate definition of the soul.

Prabhupāda: But if he knows what is soul, where is the difficulty to give definition?

Paramahaṁsa: So he says he can accept that he has a soul . . .

Paramahaṁsa: . . . but it would be hard to describe, he thinks, the nature of the soul. He said a body, which is something tangible, we can describe. But something of a spiritual nature, like the soul, must be much more difficult to describe.

Prabhupāda: You can describe it by the negative way, that soul is not body.

Paramahaṁsa: (translating) Then we are still left with the problem: What is the relationship between the two?

Puṣṭa Kṛṣṇa: Translation: "For the soul there is never birth nor death. Nor, having once been, does he ever cease to be. He is unborn, eternal, ever-existing, undying and primeval. He is not slain when the body is slain." (Yogeśvara translates)

"O Pārtha, how can a person who knows that the soul is indestructible, unborn, eternal and immutable kill anyone or cause anyone to kill?" (translates)

Church Representative: I have nothing to say against. But I cannot say that it is a definition. Do you say in English, "definition"?

Church Representative: I cannot say that it is a definition. It is a sort of creed, a profession of faith.

Prabhupāda: No, it is characteristic. Definition means you mention the characteristic. That is definition. Definition, you mention the characteristic. So that can be mentioned directly, or if it is not perceivable, then you can define in opposite way. Just like we have got experience: everything in the material world, it is beginning. There is a beginning. Anything of this—your body, my body, everything—it has got a beginning, and it has got an end. So it is stated, na jāyate na mriyate vā: "It has no beginning, no end." And nityaḥ, eternal; śāśvataḥ, very old, purāṇaḥ. Na hanyate hanyamāne śarīre (BG 2.20): "It is not destroyed, annihilated, after the destruction of the body." So if we accept this definition, then we can understand the soul is eternal. Our characteristic, if we accept these characteristics, na hanyate hanyamāne śarīre, after the destruction of body the soul is never destroyed, then you can understand the soul is eternal. And it is clearly stated, na hanyate hanyamāne śarīre: "After the destruction of the body, it is not destroyed." So it means it takes another body.

Paramahaṁsa: He says that's not necessarily the logical conclusion. He says he's familiar with that theory, but it's more a question of faith. He says it's not actually a logical conclusion that if the soul leaves this body it must take another one.

Prabhupāda: What does he mean by logic?

Yogeśvara: He says that means that, "It's not something that's very evident to me."

Prabhupāda: It may not be evident to him, but why not others?

Yogeśvara: He says one thing is that he feels kind of glad that it's more or less a question of opinion, because if it was Absolute Truth, then it would be too restricting for everyone.

Yogeśvara: He said if it were an absolute truth, it would be evident to everyone.

Prabhupāda: Yes. But everyone is not advanced in knowledge.

Yogeśvara: He says the question remains, because there are other, very spiritually advanced men who don't accept that idea.

It's not a matter of opinion, it's a matter of superior logic, extending the same basic truths to their highest perfection. So in discussing the merits of Bhagavad-gītā versus another scripture, it's not that we're trying to argue just for the sake of polemics but to establish the real standard, what is the most elevated or advanced standard of the knowledge.

Bhagavān: But people are suffering due to lack of that accurate knowledge.

Bhagavān: And our Kṛṣṇa consciousness movement is trying to make that knowledge available in practical activity to stop this suffering. It is not just a philosophy without practice. That is the reason why it is important for discussing, not just for the sake of discussing but for the sake of bringing out the highest principles for action.

Karandhara: The reason why we gather like this to discuss these principles is that just like a group of scholars will gather to refine and crystallize their knowledge.

Yogeśvara: He must excuse himself, he has a prior engagement.

Church Representative: I absolutely agree on this point, certainly. (French)

Yogeśvara: He says he's familiar with this principle.

Church Representative: Not so familiar. I know.

Yogeśvara: He says he knows of it, but he doesn't consider himself to be an expert.

Puṣṭa Kṛṣṇa: But because you are part of God, you have real interest in this. Everyone.

Yogeśvara: He says he's willing to admit this philosophy, even though he doesn't belong to it himself. He sees this as being . . . (French). He appreciates the fact that it has a coherent aspect, that it holds together logically. And this is what he appreciates.

Yogeśvara: He respects the Vaiṣṇava philosophy because it is substantial. It doesn't contradict itself.

Karandhara: So then the . . . if the Vaiṣṇava philosophy has a systematic logic, then integrity would dictate that we have to surrender or accept that logic. If a logic is true, we can't stand apart from it and simply observe it. We have to accept it ourselves.

Church Representative: (French, saying he has to go)

Bhagavān: You are right on the brink of Absolute Truth. Don't run away. (laughs)

Yogeśvara: He says that even though he has a great interest in this discussion, because he has prior commitments, he's unable to stay.

Bhagavān: Of course. Take some prasādam.

Yogeśvara: He already has the books.

Church Representative: I have, and I have read with great interest. Thank you very much. (French) I was thinking that it was only a formal visit. (French)

Bhagavān: So you're welcome to come.

Karandhara: This man was . . .what is his position?

Bhagavān: He's the head of the Russian Orthodox Church.

Karandhara: He's the head of the Church, but he cannot . . . he feels he's not qualified to discuss spiritual matters.

Bhagavān: Once last year a man in London, a professor in a religious school, said the same thing, and you said that according to our Vedic philosophy, if a teacher doesn't know something, he should step down. And his answer was, "I can't do that." (Prabhupāda chuckles)

Paramahaṁsa: It seems amazing that such fundamental questions, they remain mute, for such people like this, who are supposed to be qualified to bring other people out of their distress.

Karandhara: That's why the Church now has lost everyone, because even its leaders are saying: "I don't know anything. I'm just fumbling around like everyone else. I don't really know anything definite."

Prabhupāda: Still, he is leader.

Puṣṭa Kṛṣṇa: The impersonalists, Lord Caitanya said that they are the greatest offenders to Lord Kṛṣṇa. So most of the so-called religious people of the world today, if they have a conception of God, it is that God is impersonal spirit. That mean they are to be classified, at least in terms of this understanding, amongst the demons and asuras?

Karandhara: No, in this instance this man is . . . it's not as much that he's an impersonalist as that he has no clear idea one way or the other. He's ignorant. An impersonalist is someone in the classic sense who has . . . he's aware of the Vaiṣṇava philosophy, but he rejects that, that God is definitely not a person, and he takes that as being a lower conception.

Bhagavān: He said he had another engagement.

Paramahaṁsa: In the world today it seems as if, just like men take advantage of women and make them topless and bottomless, also they try and encourage people like this to be leaders of religion. That way the mass of people don't take any real interest. They do this in Russia, too. They kill the sincere religious leaders, and they put their own men as religious leader, and it just sort of undermines the whole purity and the importance in the instruction, and then no one repeats it.

Karandhara: In the West also, in the past ten years there's been a resurgence of what's called fundamentalism. For so long the Christian liturgy, the Christian doctrine, got so hodgepodge and so wishy-washy that people were leaving because there was simply nothing there solid for them to grasp onto. Now fundamentalism, or the very basic principles that God is the Almighty and that we are sinners and if we don't repent, God's going to strike us down with wrath and anger, that basic principle of fear of God, that is receiving new support. Many people are coming back to that, because even though it's a very vague thing, still it's something definite. "God is there, and if I do something wrong, He's going to cut me down," rather than "Well, nothing's wrong, nothing's right; it's all hodgepodge, wish-wash." People can't grasp onto that. There's nothing for them to . . .

Prabhupāda: That is Māyāvāda, "Nothing wrong, nothing right. Everything is all right."

Bhagavān: Śrīla Prabhupāda, I think we'll leave around 7:30, so perhaps you can take a little rest before the engagement.