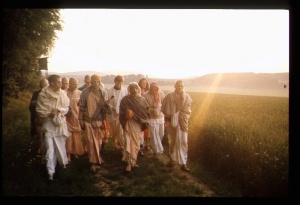 Prabhupāda: . . . therefore they are coming. Process of killing is different, because in this age if you simply kill all the pāpīs, then there will be no more existence, because everybody is pāpī. If you take sword and kill the pāpīs, then everyone will be finished. Of course, that will be done at the last stage of Kali-yuga.

But here, the process of Kṛṣṇa consciousness movement is killing the pāpa-bīja. Pāpa-bīja means just like a man is a thief. He knows that "If I steal, I, according to śāstra, I'll be punished by God. Or there is no God, then I'll be punished by the state, by the police." He knows that. And he sees also that one man who has committed theft, he is arrested and he is taken by the police. He has seen also. But still he does stealing. He knows either from the state point of view or śāstra point of view, and he sees practically. Still he does it. Why? That pāpa-bīja. In the heart the seed of committing sinful activities is there.

So simply by seeing or knowing, it will not be killed. It has to be killed by this Kṛṣṇa consciousness movement. He should be purified from the heart; he'll give up everything. So this killing process is paritrāṇāya sādhūnāṁ vināśāya ca duṣkṛtām (BG 4.8). So this pāpa-bīja, the seed of sinful activities, is being killed. Otherwise, how people give up all the sinful activities? Because the pāpa-bīja, the original seed, is being killed. You see practically.

Guest: Divine birth is not . . . there's no known being, super-being, here to . . . here you find Vietnam War, you find here Bangladesh, you find all suffering, and they'll cry all around to God that "He will come and protect us," and there is no protection anywhere from this.

Prabhupāda: Well, this kind of protection, crying at the time of danger, this is experienced from past history also. Just like in the last war in Germany. One German friend told me that naturally the all the women went to the church for praying, "My Lord, save my husband. Save my brother." Because all men were in the front; only women were left. So they were praying that "My husband may come back. My brother may come back" or "My father may come back," but nobody came back, and they thought, "Oh, there is no God. Our all prayers are useless." They became atheist.

Guest: Then that God should come.

Prabhupāda: So God is not your order-supplier.

Prabhupāda: God is not your order-supplier. You create war and pray to the church. Why you create war? Precaution is better than . . . unless you Kṛṣṇa conscious, then you will—tena tyaktena bhuñjīthā (ISO 1)—you will encroach upon others' property. That pāpa-bīja has to be killed. Now, after creating war . . . what is the use? After creating war by your own fault, if you go to the church and pray God, "Please save me," so who wanted you to create this war? They are creating their wars, and they are making God as order-supplier: "Now I have created war. Please stop it." Why? Did you do it by the sanction of God? So they must suffer.

Prabhupāda: Well, when there is war, that thing happens everywhere. But the persons who create war, they are responsible for it. Yadā yadā hi dharmasya(BG 4.7). First of all we have to understand.

So Kṛṣṇa comes to save the sādhus. But Kṛṣṇa, being Absolute, either He saves the sādhus or kills the duṣkṛtas, it is the same. It is the same. Because when Kṛṣṇa kills somebody, he is also liberated immediately. Paritrāṇāya sādhūnāṁ. Dharma-saṁsthāpanārthāya: and He comes to reestablish the principles of religion. What is that principle of religion? That is stated by Kṛṣṇa in the last paragraph of Bhagavad-gītā. Not last; in the last chapter. Sarva-dharmān parityajya. Anything which . . . dharma-saṁsthāpanārthāya: "I come to reestablish the religious principles."

Guest: What can I say? Then only when sādhus are attacked, then only . . .?

So you have to give time. You have to cooperate. This incarnation of Kṛṣṇa, Kṛṣṇa and nāma, Kṛṣṇa's name, is the same. Abhinnatvaṁ nāma-naminoḥ (CC Madhya 17.133): "There is no difference between Kṛṣṇa's name and Kṛṣṇa." So you encourage this movement, you will see that there will be no more fighting. Kṛṣṇa has come. Welcome Kṛṣṇa. This is non-cooperation Kṛṣṇa, then how you'll get happiness? Kṛṣṇa has already come by this Kṛṣṇa consciousness movement. You receive Him. Yad yad ācarati śreṣṭha (BG 3.21). You are all respectable gentlemen. You accept it. Then others will follow. Tat tad evetaro janaḥ. And if leading personalities of the society, reject it, then how Kṛṣṇa is welcome? How can you expect? (Hindi: Speak? Is it alright or not?)

Everyone should welcome this movement, Kṛṣṇa consciousness movement. Then actually there will be dharma-saṁsthāpanārthāya, paritrāṇāya sādhūnām. Everything will be done. Just like when Kṛṣṇa was personally present, how many received Him? Only the Pāṇḍavas and the gopīs and the vṛndāvana-līlā is there. Nobody knew Him as Kṛṣṇa. In the Battlefield of Kurukṣetra, how many knew Him that He was Kṛṣṇa? But everyone benefited. Everyone benefited. Everyone who died in the Battlefield of Kurukṣetra, they got salvation. That is stated in Bhīṣma's teachings.

So they got the benefit, but not that everyone understood Kṛṣṇa. Avajānanti māṁ mūḍhā mānuṣīṁ tanum . . . (BG 9.11). Many . . . even nowadays there are so many scholars . . . (indistinct) . . . svāmīs, they do not accept Kṛṣṇa as the Supreme Personality of Godhead. Even nowadays, what to speak of then? Even at the present moment. They are reading Bhagavad-gītā, and they are trying to kill Bhagavān, Kṛṣṇa. That's all. That is their business, killing . . . Kaṁsa's business. Kaṁsa was trying killing Kṛṣṇa, always thinking, "How to kill Kṛṣṇa?"

So, so many Bhagavad-gītā commentators, scholars, their only business is how to drive away Kṛṣṇa from Bhagavad-gītā. That is their business. They do not give on the personality of Kṛṣṇa as the Supreme Personality of Godhead. I have several times told you. Even scholars like Dr. Radhakrishnan, he says like that, "It is not to Kṛṣṇa, person." Why?

Why this demonic attitude? How you can get help from Kṛṣṇa? That is . . . we are discussing now daivī-sampāt and āsuri-sampāt. Āsuri-sampāt means to kill Kṛṣṇa. That's all. To wipe out Kṛṣṇa from Bhagavad-gītā and bring something else. Six hundred and sixty-four editions of Bhagavad-gītā. This is going on.