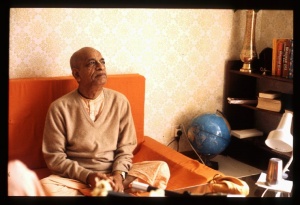 The bodily symptoms manifested by a devotee in expressing ecstatic love for Kṛṣṇa are called anubhāva. Practical examples of anubhāva are as follows: dancing, rolling on the ground, singing very loudly, stretching the body, crying loudly, yawning, breathing very heavily, neglecting the presence of others, drooling, laughing like a madman, wheeling the head and belching. When there is an extraordinary excess of ecstatic love, with all of these bodily symptoms manifested, one feels relieved transcendentally.

While watching the rāsa dance performed by Lord Kṛṣṇa and the gopīs, Lord Śiva beheld the beautiful face of Kṛṣṇa and immediately began to dance and beat upon his small diṇḍima drum. While Lord Śiva was dancing in ecstasy, his eldest son, Gaṇeśa, joined him.

Rolling on the Ground

In the Third Canto, First Chapter, verse 32, of Śrīmad-Bhāgavatam, Vidura inquires from Uddhava, "My dear friend, is Akrūra in an auspicious condition? Not only is he a learned scholar and sinless, but he is also a devotee of Lord Kṛṣṇa. He has such ecstatic love for Kṛṣṇa that I have seen him rolling upon Kṛṣṇa's footprints in the dust as if bereft of all sense." Similarly, one gopī gave a message to Kṛṣṇa that Rādhārāṇī, because of Her separation from Him and because of Her enchantment with the aroma of His flower garlands, was rolling on the ground, thereby bruising Her soft body.

One gopī informed Kṛṣṇa that when Śrīmatī Rādhārāṇī was singing about His glories, She enchanted all of Her friends in such a way that they became stonelike and dull. At the same time, the nearby stones began to melt away in ecstatic love.

When Nārada Muni was chanting the Hare Kṛṣṇa mantra, he chanted so loudly that it was apprehended that Lord Nṛsiṁha had appeared. Thus all the demons began to flee in different directions.

It is said that sometimes when Nārada, the carrier of the vīṇā, remembers his Lord Kṛṣṇa in great ecstasy, he begins to stretch his body so vigorously that his sacred thread gives way.

A gopī once said to Kṛṣṇa, "My dear son of Nanda Mahārāja, by the sound of Your flute Śrīmatī Rādhārāṇī has become full of lamentation and fear, and thus, with a faltering voice, She is crying like a kurarī bird."

It is described that by hearing the vibration of Kṛṣṇa's flute, Lord Śiva becomes very puzzled and begins to cry so loudly into space that the demons become vanquished and the devotees become overwhelmed with joy.

It is said that when the full moon rises, the lotus petals become expanded. Similarly, when Kṛṣṇa used to appear before Rādhārāṇī, Her face, which is compared to the lotus flower, would expand by Her yawning.

As far as breathing heavily is concerned, it is stated, "Lalitā (one of the gopīs) is just like a cātakī bird, which only takes water falling directly from the rain cloud and not from any other source." In this statement Kṛṣṇa is compared to the dark cloud, and Lalitā is compared to the cātakī bird seeking only Kṛṣṇa's company. The metaphor continues to say, "As a heavy wind sometimes disperses a mighty cloud, so the heavy breath from Lalitā's nostrils caused her to miss Kṛṣṇa, who had disappeared by the time she recovered herself."

Neglecting the Presence of Others

As far as neglecting the presence of others is concerned, the wives of the brāhmaṇas who were performing sacrifices at Vṛndāvana left home as soon as they heard that Kṛṣṇa was nearby. They left their homes without caring for their learned husbands. The husbands began to discuss this among themselves: "How wonderful is the attraction for Kṛṣṇa that it has made these women leave us without any care!" This is the influence of Kṛṣṇa. Anyone who becomes attracted to Kṛṣṇa can be relieved from the bondage of birth and death, which can be compared to the locked - up homes that were neglected by the wives of the brāhmaṇas.

In the Padyāvalī there is a statement by some devotees: "We shall not care for any outsiders. If they should deride us, we shall still not care for them. We shall simply enjoy the transcendental mellow of chanting Hare Kṛṣṇa, and thus we shall roll on the ground and dance ecstatically. In this way we shall eternally enjoy transcendental bliss."

As an example of the running down of saliva from the mouth, it is stated that sometimes when Nārada Muni was chanting the Hare Kṛṣṇa mantra, he remained stunned for a while, and saliva oozed from his mouth.

When a devotee laughs very loudly like a madman, it is done out of an extraordinary agitation of ecstatic love within the heart. Such mad laughing is an expression of the condition of the heart which is technically called aṭṭa-hāsa. When a devotee becomes affected with this mental condition, his love is expressed through the lips. The laughing sounds, coming one after another, are compared to flowers falling from the creeper of devotion which grows within the heart of the devotee. In the Caitanya-caritāmṛta devotional service to the Lord is also compared to a creeper which rises up to the lotus feet of Kṛṣṇa in Goloka Vṛndāvana.

Wheeling of the Head

One gopī told her friend, "It appears that Lord Kṛṣṇa, the enemy of the demon Agha, has released from His mouth a whirlwind which is acting on your head and is gradually proceeding to do the same to the other lotus-eyed gopīs."

Sometimes trembling of the whole body and hemorrhaging from some part of the body are also manifested in response to ecstatic love for Kṛṣṇa, but such symptoms are very rare, and therefore Śrīla Rūpa Gosvāmī does not discuss any further on this point.