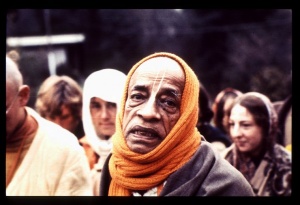 Puṣṭa Kṛṣṇa: Are the prajāpatis responsible for propagating human species or all species of life?

Puṣṭa Kṛṣṇa: Are there different prajāpatis for the different species?

Prabhupāda: Yes. Brahmā is the original. (break) . . .a class of men, they are called beḍiyās. They know all these herb, which herb is medicine for certain disease, and they sell in the market. Every one of these is meant for some medicine. They know it.

Hari-śauri: They use flesh for curing things?

Hari-śauri: They use flesh for curing diseases?

Prabhupāda: Yes. Animal-killing is only allowed when it is absolutely necessary, for medicine. Suppose by killing one animal hundreds of lives are saved, so that is allowed. One preparation is chāgalāgdha-ghṛta. It is prepared . . . A live goat is put into the ghee with other ingredients, and that is a good medicine for phthisis.

Puṣṭa Kṛṣṇa: They actually cook the live goat in the ghee?

Puṣṭa Kṛṣṇa: Maybe we should withhold this science from the Western world for a while.

Prabhupāda: No, you are expert already. (laughter)

Hari-śauri: There were some mantras they chant . . . Just like the sacrifices where they would give new life to a sacrificed animal. They would do the same thing with this?

Prabhupāda: To test, to test the Vedic mantra.

Prabhupāda: Who? No, this is used for medicine.

Puṣṭa Kṛṣṇa: Many, many of the Western medicines are taken from different glands from animals.

Devotee (1): They had an Āyur-vedic doctor in New Vrindavan, and he was prescribing mung and rice diet for the . . .

Puṣṭa Kṛṣṇa: He's the one who told Rameśvara prabhu not to take any sugar when he had hepatitis. He told them that for hepatitis one should take . . . What was it?

Prabhupāda: So it was taken?

Dhṛṣṭadyumna: Rameśvara was taking, but then he heard that Your Divine Grace said he should take papaya and sugar.

Dhṛṣṭadyumna: So he immediately stopped and followed Your Divine Grace's . . .

Prabhupāda: It was beneficial?

Puṣṭa Kṛṣṇa: I also got over hepatitis following Prabhupāda's prescription.

Śyāmakuṇḍa: Prabhupāda, yesterday in this book it said that when a cow gets so old, the most economic solution to do with it is not to waste the meat, that it should be slaughtered.

Śyāmakunda: The karmīs, they say that its . . . When you have this cow that won't give any more milk and its teeth are rotten where its going to die—it can't hardly eat properly—that it's a waste to not use that meat to feed people. It should be slaughtered.

Prabhupāda: I have written?

Śyāmakunda: They say that is economically proper thing to do is to kill the cow after it . . . er, and not waste the meat.

Prabhupāda: And who will take? When he'll die, who will take his meat? That is also economical. Why don't you give it to the animal-eaters instead of wasting it? Why they bury in the ground? Why? Let it be thrown, for eating by the jackals or anybody else.

Śyāmakunda: The people should eat their . . . The people, then, according to that philosophy, right?

Prabhupāda: No, when man is dead, why the economic calculation is not taken? Hmm?

Devotee (2): Because they think it is animal-like.

Prabhupāda: Animal or a man, when it is dead, then it is the same value. Is there any difference of value between the animal body and man's body?

Devotee (2): They think it is barbaric.

Prabhupāda: "They think," but you think like human being.

Puṣṭa Kṛṣṇa: But the animal has no soul.

Prabhupāda: Soul or not soul, when the body is dead, is there any difference of value?

Śyāmakunda: Well, it doesn't seem human to eat a human.

Prabhupāda: This is nonsense, the rascal's nonsense.

Hari-śauri: It's too horrifying for them to contemplate that they may start eating each other.

Puṣṭa Kṛṣṇa: Or their family dog.

Śyāmakunda: But if it was wrapped up in a package and they didn't know it was the dog or their mother, they could probably eat it.

Prabhupāda: Yes, they can eat by packing.

Hari-śauri: They eat their pets sometimes. I used to have a pet rabbit, and one day I came home from school and my father had killed it and eaten it for dinner. (laughter) He said I wasn't looking after it properly, so he . . .

Puṣṭa Kṛṣṇa: This business of simply taking economics into consideration . . .

Prabhupāda: They do not. Rascals. How to live, they do not know. Animals. There is a class of men in India, they take, I told you, the dead body of a cow.

Prabhupāda: Muci, yes. Their business is shoe maker. So when the cow is dead, they take it, they eat the meat and take the skin and the hoof. They make business without any, what is called, investment. Harer nāma (CC Adi 17.21). That is economic. He gets the skin without any price, and he makes shoes and gets full profit. But that is for a class of men, not for all. Economic gain for a cobbler is not the economic gain for a brāhmaṇa. "One man's food, another man's poison."

Puṣṭa Kṛṣṇa: Is it considered, Śrīla Prabhupāda, that when a brāhmaṇa is engaged in the activities of plowing and cultivating, that he has become a vaiśya?

Prabhupāda: No. If there is nobody to help, he can do.

Hari-śauri: As long as he keeps up his brahminical standards.

Prabhupāda: Huh? Yes. This is our car?

Devotee (3): Śrīla Prabhupāda? It says in the Caitanya-caritāmṛta,