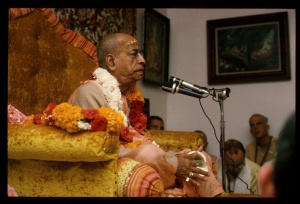 Prabhupāda: . . . that the energy is displayed. It works; again it comes back to the original. That's all. So what is their idea of conservation of energy? The same thing?

Prabhupāda: But that is observed, because we see the energy is coming from the powerhouse, electric energy. How you cannot deny?

Karandhara: The energy is just generated there, but it is not created there.

Prabhupāda: Generated . . . you simply change the name. What is the difference between generated and created?

Karandhara: Well, created means to be born or to start.

Prabhupāda: Yes, born. The child is created. There was no child.

Karandhara: But the energy which makes up this body was always present.

Prabhupāda: Huh? What is that?

Hṛdayānanda: Before you prepare it, that particular preparation . . .

Prabhupāda: This is called impersonalism . . .

Karandhara: But the food was always there.

Prabhupāda: . . . that . . . we talk in relationship, everything, because this is relative world. Everything we talk, that is in relative consideration. That is Māyāvāda philosophy. They do not accept the relativity. Although when there is some toothache, he will go to the doctor.

Why does he not . . . "No, it is māyā. Why I shall be troubled with the toothache?" Why does he go to the doctor? That is the defect of Māyāvāda philosophy. They are being affected by the change, but still, they will say: "There is no change. It is all the same."

Karandhara: Well, that is what they say. They say: "If it is all the same, then I can go to the doctor."

Prabhupāda: Yes, but that is foolishness. If they say once that, "The suffering and not suffering is all the same," why does he go to the doctor?

Karandhara: Well, when you say: "It's all the same," it doesn't matter what you do. You have encompassed everything.

Girirāja: But they always go.

Karandhara: Well, it doesn't matter that I become angry.

Prabhupāda: (laughing) So let me beat you. You don't become angry or become angry, I don't care.

Prabhupāda: (laughs) That's all right. Then there is no question of philosophy. Finish. Everything one. That . . . this philosophy was discussed by Caitanya Mahāprabhu and His mother. He was eating dirt, and mother gave Him sandeśa. So He did not care to take sandeśa; He was eating dirt. Then mother came, "My dear boy, why You are eating dirt? Here is sandeśa, I have given You." "Mother, what is the difference between sandeśa and dirt? They are all the same. (laughing) They are all the same." "Yes, my dear boy, You are impersonalist philosopher. But it is required. Just like the water jug is also earth, made of earth. It is earth. And this ground is also earth.

But when you have to keep water, you require this water jug, not this earth." That is relativity. If you have to take work, then you cannot say, "Well, this is also earth, this is also . . . why . . .? The pot is not required. Put water here." Then you will suffer—no water. So this kind of philosophy was discussed when Caitanya Mahāprabhu was a child. (break) . . . and the tree is the same thing. But when I walk, I require the stick, not this tree. (break) . . . the dogs must be on lash (leash). If somebody does not do that, he is criminal. So if he pleads in the court, "There is no difference, dogs on the lash or without lash. Why you are punishing me?" But will that be accepted?

Karandhara: Well, the judge says: "There is no difference whether I put you in jail or not."

Prabhupāda: (laughs) That's it. Then he has to accept jail. He should not defend himself. "Never mind. I go to jail." Why he appoints a lawyer to defend himself?

Karandhara: Well, that's what the impersonalist philosophers say, that "Go ahead and . . ." (break)

Prajāpati: The most famous theologian of this century named Paul Tillich said that all words are symbols, and God is a religious symbol pointing to our ultimate concern.

Karandhara: Except Paul Tillich was the ultimate rascal. He was a debaucher. He debauched women all over Europe.

Prabhupāda: Sometimes the drunkards say also like that. They get inspiration by drinking. Yes.

Karandhara: There is one very famous philosopher named Dean Brown. He said that . . . he had a saying that, "Some men say that you become intoxicated by wine, but I become sobered by wine."

Prabhupāda: That can be accepted. "One man's food, another man's poison." That is going on everywhere. But for that reason one cannot accept poison as food. Is it not? Just like stool is food for the pigs. But that does not mean stool is food. It may be food for a certain class of animal. (break) No.

Svarūpa Dāmodara: I don't think so.

Prajāpati: Food for somebody.

Karandhara: It is very hard.

Prajāpati: Harder than a bullet? (break)

Prabhupāda: Oh, you have not covered?

Prabhupāda: Oh, so they are coming to consciousness. Why they are praying to God?

Prajāpati: Things get so bad, they have to turn to God.

Prabhupāda: Duḥkhse sab hari bhaje. When one is distressed, there is sense of God consciousness. But if they continue it even in their happiness, then it is all right.

Prajāpati: They must have knowledge, though, Śrīla Prabhupāda.

Prabhupāda: But in happiness they forget.

(aside) Don't keep so near.

Prajāpati: Without knowledge, their sentiment is not so important.

Prajāpati: Without knowledge, their sentiment is just worthless.

Prabhupāda: That is everywhere. Luxury leads to poverty. (break) . . . a living man, but if you are actually interested, why don't you do it, organized way? Sentiment, it is good, but if you do not understand the science, sentiment may be for the time being. Sentiment is sentiment. That will not act. They are admitting sinful activities, eh?

Prajāpati: Yes, they are admitting that they . . . they are in an abyss of moral decay.

Prabhupāda: Certainly. Then their business will be finished. Then they will say: "Where we stand? It is all finished." Now you stand on a different platform.

Prajāpati: Yesterday, Śrīla Prabhupāda, in class you mentioned how the churches, people could pay them for supposedly becoming very religious men. In Las Vegas, the capital of the gambling and the illicit sex and the intoxication, where all these things are very prominent, the churches there are very prominent also. These big demons, they pay large money to the churches, and therefore they feel like they are very religious men even though they are committing all these sinful activities.

Prabhupāda: Yes. And by taking their sinful money, because they do not engage to Kṛṣṇa, they also become sinful. Affected. Infection. (break) They have mentioned something like sinful?

Prabhupāda: What he has said, Karandhara?

Karandhara: He doesn't say specifically. He just said that generally the country is degraded and people have become apathetic, and the morals have reduced. He was referring to things like Watergate, political scandals, and the youth degradation.

Prabhupāda: But why they have degraded? That is to be understood. Not known to them.

Karandhara: Yes. Actually they don't have the scientific analysis. They just have some vague understanding that things are falling apart.

Prabhupāda: April 30th. So on that date arrange a meeting of the senators. And I will go and speak and have kīrtana, what is actually life. Approach them that, "We are spreading this. So why not arrange meeting?" Or any day, on 30th or any day. (break) . . . office here in Los Angeles?

Prabhupāda: So see him. You and you go and arrange, and explain to him that, "This is our movement, simply how to make people pure, moral, sinless, and advanced in God consciousness." Just take this opportunity. "You come and see how God consciousness we are executing, and then arrange a meeting in the Senate. And try to understand, 'It is simply sentiment, or how it will help me?' " (break) . . . so much money, and still they are crying, "Degradation." So they should come to their senses. This kind of understanding will not help. They must understand scientifically.

Prabhupāda: So it is our duty to help them. Those who are . . . just like here is an opportunity. Go, see them immediately, the person. It is our duty. (break) . . . sometime I can go and see. Who is the senator, local?

Karandhara: I'm not sure.

Prabhupāda: Find out and arrange some meeting. I shall go personally.

Svarūpa Dāmodara: How many senators here in California?

Prabhupāda: As we know about God, nobody knows in the world. That is a fact. Any person, we can challenge that he has no clear idea what is God, how to contact God, how to . . . nobody knows. (break)

Prajāpati: . . . a vague notion that they should be serving God, but they do not know how or what will please God.

Prabhupāda: Vague notion must be there, because we have got relationship with God, eternal. So that is stated in the Caitanya-caritāmṛta: nitya-siddha. It is eternally a fact that we are servant of God, but we have forgotten this. So that has to be revived by this śravaṇa-kīrtana, by hearing, chanting. This is the process. Otherwise, the relationship is already there. It is not to be created. It is already there. (break)

Prabhupāda: And what is the Vedānta?

Hṛdayānanda: Speculation. They are speculators. They mostly have very elderly members, and they sit around in the evening and discuss.

Prabhupāda: A few. Not even a dozen.

Karandhara: In their āśrama they say they have eight or ten people living there.

Karandhara: No, all old ladies and men. The only reason they are allowed to live there is because they have given huge sums as donations. (break)

Prabhupāda: . . . last almost one hundred years, eighty, eighty-five years. So how many followers they have got?

Karandhara: They have made no significant impression on anyone.

Karandhara: Trivikrama Svāmī went to their monastery in Laguna Beach. So they were serving meat. Trivikrama said: "Why do you eat meat?" And they said: "That doesn't matter. What does it matter what you eat?"

Prajāpati: . . . the greatest sin is to think of ourselves as sinners.

Prabhupāda: Ah. Because he was a rascal number one sinner.

Svarūpa Dāmodara: That is just like Śrīla Prabhupāda's example that the rabbits closing their eyes thinking that the danger is over when there is danger.

Hṛdayānanda: . . . Shivananda I gave a lecture at an āśrama where his disciple was teaching, Vishnu Devananda. So he told a story how Shivananda, he would find out the lowest class of people, and he would go and garland them and worship them just like the Deity. And so his argument was that in Bhagavad-gītā it says, paṇḍitāḥ sama-darśinaḥ (BG 5.18).

Prabhupāda: He could not answer this? Sama-darśinaḥ, equal. Then he must be equal to the lower and the higher. So why he is particularly to the lower class? Then he is not sama-darśinaḥ.

Hṛdayānanda: His argument would be that he is trying to teach a lesson that the higher . . .

Prabhupāda: No, no, no. He may say nonsense. The fact is this, that if he is sama-darśinaḥ, equal, then why he is particularly aiming to the lower class? That means he is not sama-darśinaḥ. He has not come to the stage. He is simply talking nonsense. Sama-darśinaḥ means he is equal to everyone. That is sama-darśinaḥ. Sama-darśinaḥ does not mean to get a cheap adoration, popularity, I go to the poor. That is their Ramakrishna Mission. They also are doing that same thing, daridra-nārāyaṇa-sevā, like that. Why daridra? Why not real Nārāyaṇa? Just like this morning we read nārāyaṇa-pade. Never said daridra-nārāyaṇa-pade. "To the great." Surrender does not mean to the lower. Does it mean, surrender? Surrender, this relationship means that to whom I surrender, he is greater than me. And to the lower, mercy. These two words. One who is lower than me, I may show my mercy, but one who is greater than me, there is the question of surr . . . (break) (end)