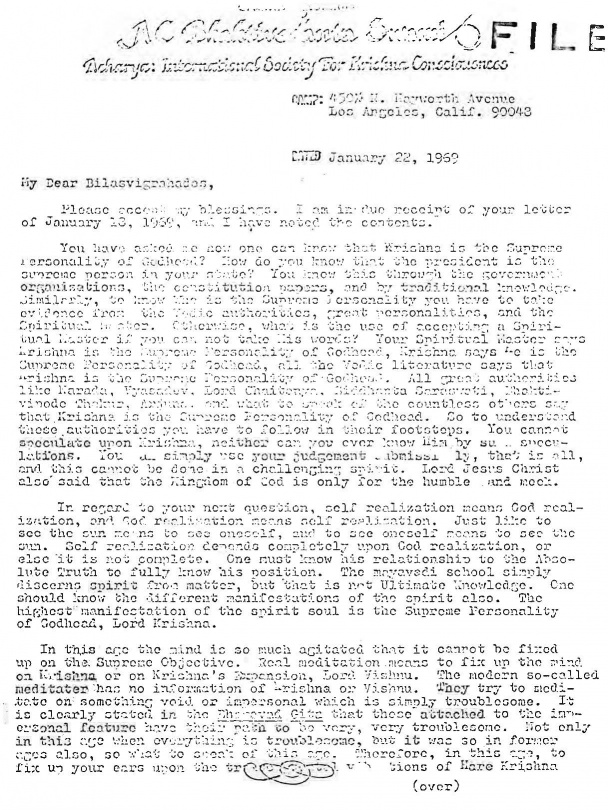 Letter to Bilasavigrahadas (Page 1 of 2)

Letter to Bilasavigrahadas (Page 2 of 2)

Please accept my blessings. I am in due receipt of your letter of January 18, 1969, and I have noted the contents.

In this age the mind is so much agitated that it cannot be fixed up on the Supreme Objective. Real meditation means to fix up the mind on Krishna or on Krishna's Expansion, Lord Visnu. The modern so-called meditater has no information of Krishna or Visnu. They try to meditate on something void or impersonal which is simply troublesome. It is clearly stated in the Bhagavad-gita that those attached to the impersonal feature have their path to be very, very troublesome. Not only in this age when everything is troublesome, but it was so in former ages also, so what to speak of this age. Therefore, in this age, to fix up your ears upon the transcendental vibrations of Hare Krishna is the highest form of meditation, and the only one which will prove feasible for you. We may or may not condemn the impersonalists, but they are already condemned by Lord Krishna in the Bhagavad Gita.

Actually, there is nothing wrong with you because you have already come to the platform of Krishna Consciousness. Only by the influence of your past habits is it taking perhaps more time for you to adjust things. I hope that by the Grace of Krishna you will stick rigidly to chanting your 16 rounds or more daily. This will solve all of your questions. Try to engage yourself in the service of Krishna and everything will be revealed to you without fail.