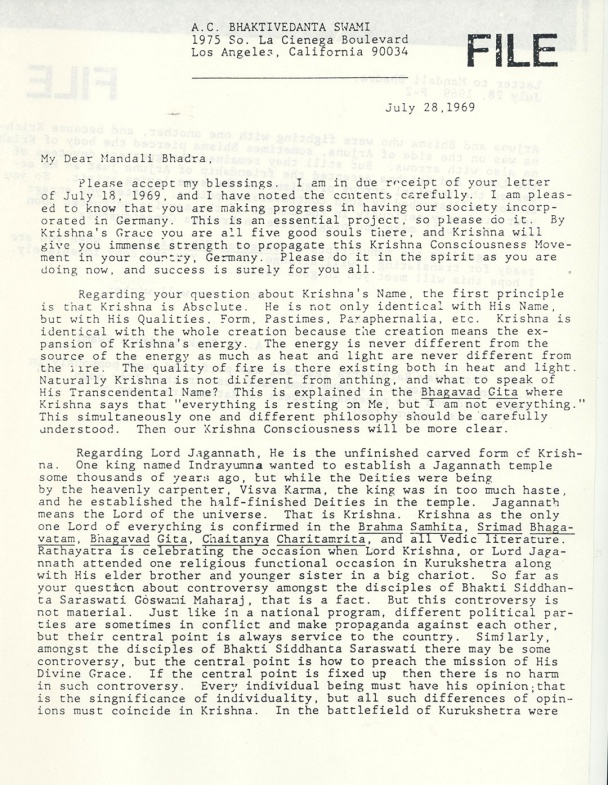 Letter to Mandali Bhadra (Page 1 of 2) 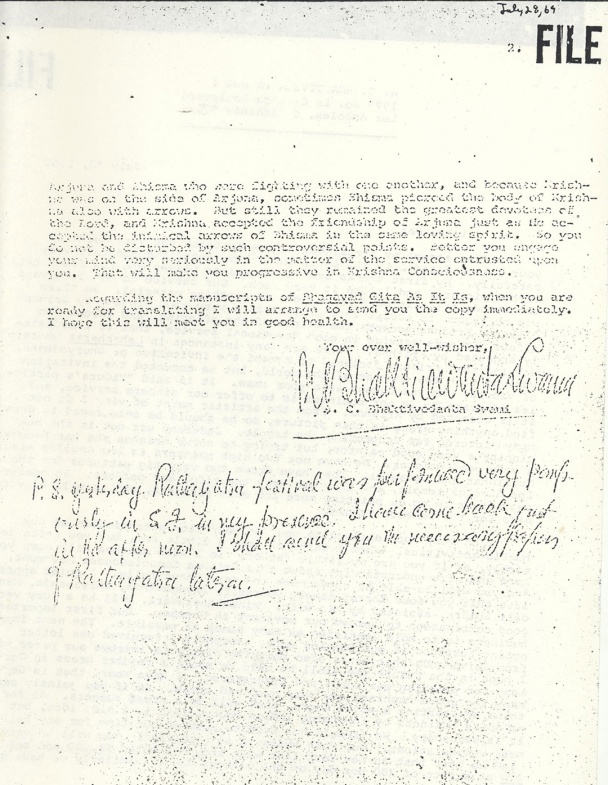 Letter to Mandali Bhadra (Page 2 of 2)

Please accept my blessings. I am in due receipt of your letter of July 18, 1969, and I have noted the contents carefully. I am pleased to know that you are making progress in having our society incorporated in Germany. This is an essential project, so please do it. By Krishna's Grace you are all five good souls there, and Krishna will give you immense strength to propagate this Krishna Consciousness Movement in your country, Germany. Please do it in the spirit as you are doing now, and success is surely for you all.

Regarding your question about Krishna's Name, the first principle is that Krishna is Absolute. He is not only identical with His Name, but with His Qualities, Form, Pastimes, Paraphernalia, etc. Krishna is identical with the whole creation because the creation means the expansion of Krishna's energy. The energy is never different from the source of the energy as much as heat and light are never different from the fire. The quality of fire is there existing both in heat and light. Naturally Krishna is not different from anything, and what to speak of His Transcendental Name? This is explained in the Bhagavad Gita where Krishna says that "everything is resting on Me, but I am not everything." This simultaneously one and different philosophy should be carefully understood. Then our Krishna Consciousness will be more clear.

Regarding Lord Jagannath, He is the unfinished carved form of Krishna. One king named Indradyumna wanted to establish a Jagannath temple some thousands of years ago, but while the Deities were being [text missing] by the heavenly carpenter, Visva Karma, the king was in too much haste, and he established the half-finished Deities in the temple. Jagannath means the Lord of the universe. That is Krishna. Krishna as the only one Lord of everything is confirmed in the Brahma Samhita, Srimad Bhagavatam, Bhagavad Gita, Chaitanya Charitamrta, and all Vedic literature. Rathayatra is celebrating the occasion when Lord Krishna, or Lord Jagannath attended one religious functional occasion in Kurukshetra along with His elder brother and younger sister in a big chariot. So far as your question about controversy amongst the disciples of Bhakti Siddhanta Saraswati Goswami Maharaj, that is a fact. But this controversy is not material. Just like in a national program, different political parties are sometimes in conflict and make propaganda against each other, but their central point is always service to the country. Similarly, amongst the disciples of Bhakti Siddhanta Saraswati there may be some controversy, but the central point is how to preach the mission of His Divine Grace. If the central point is fixed up then there is no harm in such controversy. Every individual being must have his opinion; that is the significance of individuality, but all such differences of opinions must coincide in Krishna. In the battlefield of Kurukshetra were Arjuna and Bhisma who were fighting with one another, and because Krishna was on the side of Arjuna, sometimes Bhisma pierced the body of Krishna also with arrows. But still they remained the greatest devotees of the Lord, and Krishna accepted the friendship of Arjuna just as He accepted the inimical arrows of Bhisma in the same loving spirit. So you do not be disturbed by such controversial points. Better you engage your mind very seriously in the matter of the service entrusted upon you. That will make you progressive in Krishna Consciousness.

Regarding the manuscripts of Bhagavad Gita As It Is, when you are ready for translating I will arrange to send you the copy immediately. I hope this will meet you in good health.


P.S. yesterday Rathayatra festival was performed very pompously in S.F. in my presence. I have come back just in the afternoon. I shall send you the necessary papers of Rathayatra later on. [handwritten]