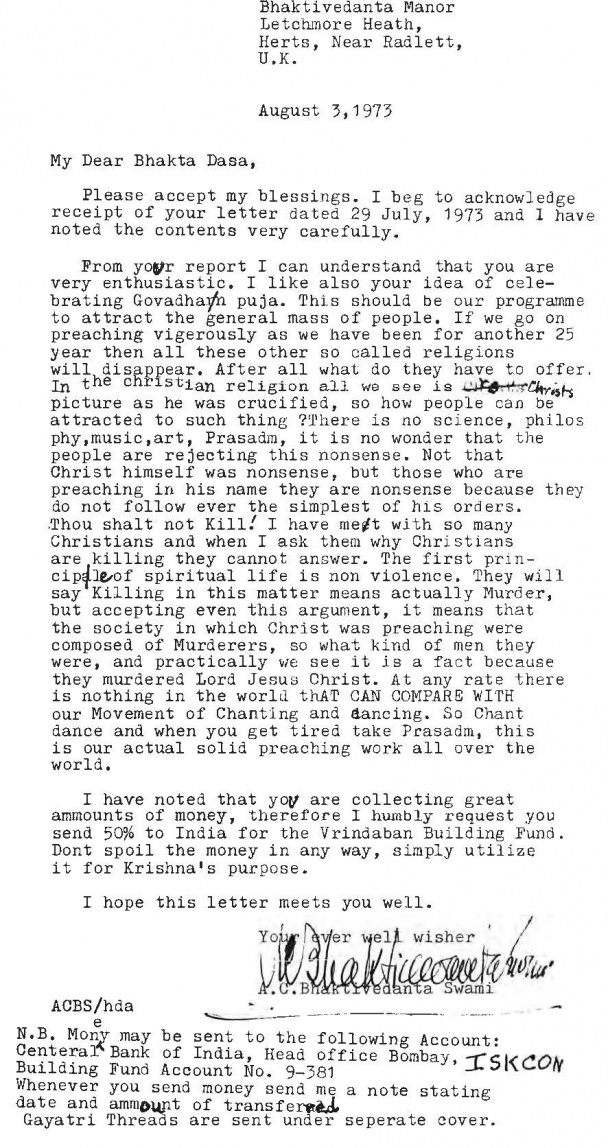 Please accept my blessings. I beg to acknowledge receipt of your letter dated 29 July, 1973 and I have noted the contents very carefully.

From your report I can understand that you are very enthusiastic. I like also your idea of celebrating Govardhan puja. This should be our programme to attract the general mass of people. If we go on preaching vigorously as we have been for another 25 year then all these other so called religions will disappear. After all what do they have to offer. In the Christian religion all we see is Christ's [handwritten] picture as he was crucified, so how people can be attracted to such thing? There is no science, philosophy, music, art, Prasadm, it is no wonder that the people are rejecting this nonsense. Not that Christ himself was nonsense, but those who are preaching in his name they are nonsense because they do not follow even the simplest of his orders. Thou shalt not Kill. I have met with so many Christians and when I ask them why Christians are killing they cannot answer. The first principle of spiritual life is non violence. They will say Killing in this matter means actually Murder, but accepting even this argument, it means that the society in which Christ was preaching were composed of Murderers, so what kind of men they were, and practically we see it is a fact because they murdered Lord Jesus Christ. At any rate there is nothing in the world thAT CAN COMPARE WITH our Movement of Chanting and dancing. So Chant dance and when you get tired take Prasadm, this is our actual solid preaching work all over the world.

I have noted that you are collecting great amounts of money, therefore I humbly request you send 50% to India for the Vrindaban Building Fund. Don't spoil the money in any way, simply utilize it for Krishna's purpose.

Your ever well wisher

N.B. Money may be sent to the following Account:
Central Bank of India, Head office Bombay, ISKCON [handwritten]Building Fund Account No. 9-381
Whenever you send money send me a note stating date and ammount of transferred.
Gayatri Threads are sent under seperate cover.