740428 - Letter to Balavanta written from Hyderabad

From Vanisource
(Redirected from Letter to Balavanta -- Tirupati 28 April, 1974)
Jump to: navigation, search 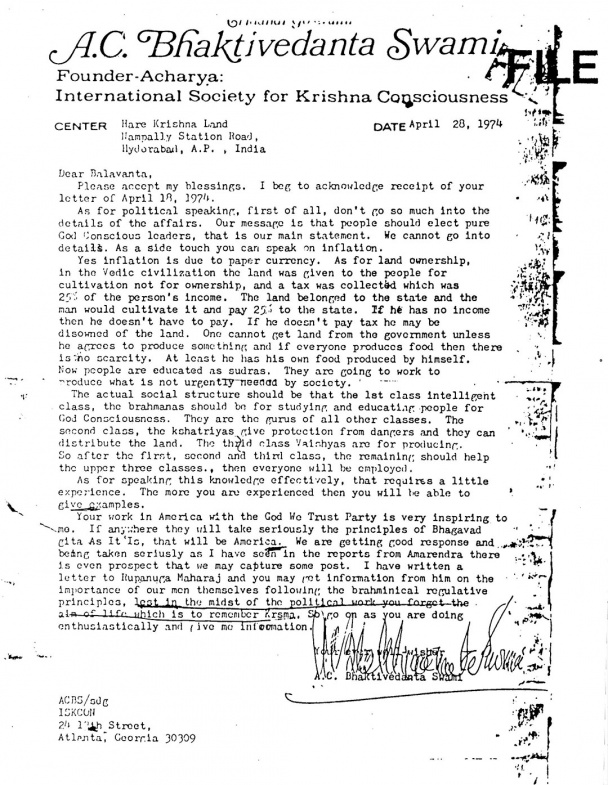 Please accept my blessings. I beg to acknowledge receipt of your letter of April 18, 1974.

As for political speaking, first of all, don't go so much into the details of the affairs. Our message is that people should elect pure God Conscious leaders, that is our main statement. We cannot go into details. As a side touch you can speak on inflation.

Yes inflation is due to paper currency. As for land ownership, in the Vedic civilization the land was given to the people for cultivation not for ownership, and a tax was collected which was 25% of the person's income. The land belonged to the state and the man would cultivate it and pay 25% to the state. If he has no income then he doesn't have to pay. If he doesn't pay tax he may be disowned of the land. One cannot get land from the government unless he agrees to produce something and if everyone produces food then there is no scarcity. At least he has his own food produced by himself. Now people are educated as sudras. They are going to work to produce what is not urgently needed by society.

The actual social structure should be that the 1st class intelligent class, the brahmanas should be for studying and educating people for God Consciousness. The are the gurus of all other classes. They second class, the kshatriyas give protection from dangers and they can distribute the land. The third class Vaishyas are for producing. So after the first, second and third class, the remaining should help the upper three classes, then everyone will be employed.

As for speaking this knowledge effectively, that requires a little experience. The more you are experienced then you will be able to give examples.

Your work in America with the God We Trust Party is very inspiring to me. If anywhere they will take seriously the principles of Bhagavad gita As It Is, that will be America. We are getting good response and being taken seriously as I have seen in the reports from Amarendra there is even prospect that we may capture some post. I have written a letter to Rupanuga Maharaj and you may get information from him on the importance of our men themselves following the brahminical regulative principles, least in the midst of political work you forget the aim of life which is to remember Krsna. So go on as you are doing enthusiastically and give me information.