701114 - Letter to Acyutananda written from Bombay 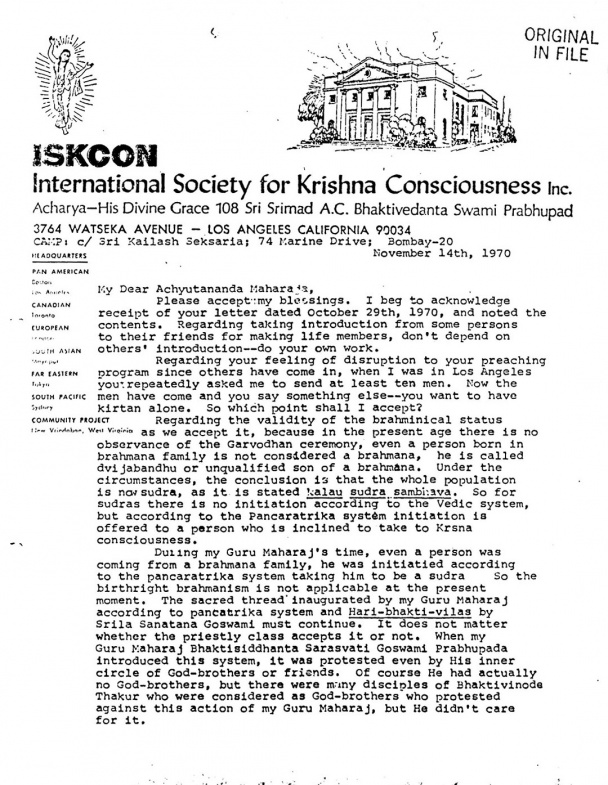 Letter to Achyutananda (Page 1 of 2) 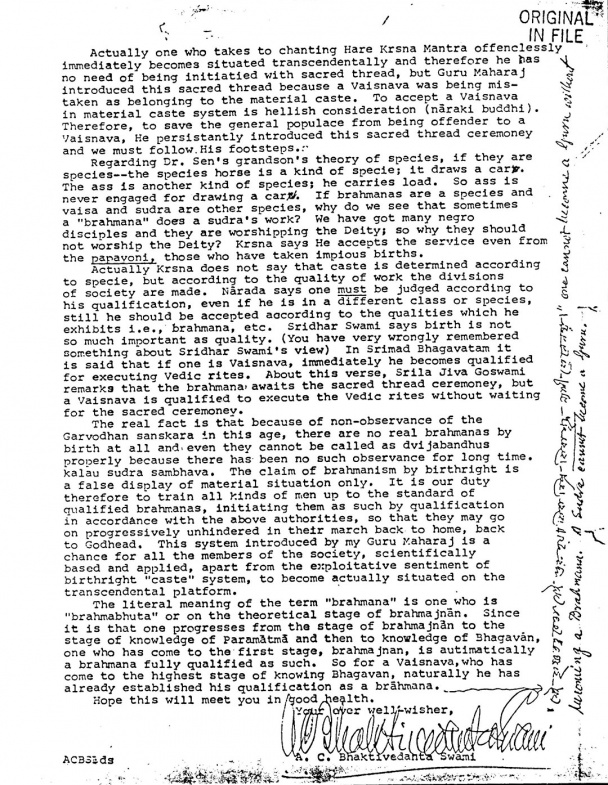 Letter to Achyutananda (Page 2 of 2)

My Dear Achyutananda Maharaja,
Please accept my blessings. I beg to acknowledge receipt of your letter dated October 29th, 1970, and noted the contents. Regarding taking introduction from some persons to their friends for making life members, don't depend on others' introduction--do your own work.
Regarding your feeling of disruption to your preaching program since others have come in, when I was in Los Angeles you repeatedly asked me to send at least ten men. Now the men have come and you say something else--you want to have kirtan alone. So which point shall I accept?
Regarding the validity of the brahminical status as we accept it, because in the present age there is no observance of the Garvodhan ceremony, even a person born in brahmana family is not considered a brahmana, he is called dvijabandhu or unqualified son of a brahmana. Under the circumstances, the conclusion is that the whole population is now sudra, as it is stated kalau sudra sambhava. So for sudras there is no initiation according to the Vedic system, but according to the Pancaratrika system initiation is offered to a person who is inclined to take Krsna consciousness.
During my Guru Maharaj's time, even a person was coming from a brahmana family, he was initiatied according to the pancaratrika system taking him to be a sudra. So the birthright brahmanism is not applicable at the present moment. The sacred thread inaugurated by my Guru Maharaj according to pancaratrika system and Hari-bhakti-vilasa by Srila Sanatana Goswami must continue. It does not matter whether the priestly class accepts it or not. When my Guru Maharaj Bhaktisiddhanta Sarasvati Goswami Prabhupada introduced this system, it was protested even by His inner circle of God-brothers or friends. Of course He had actually no Godbrothers, but there were many disciples of Bhaktivinode Thakur who were considered as Godbrothers who protested against this action of my Guru Maharaj, but He didn't care for it.

Actually one who takes to chanting Hare Krsna Mantra offenselessly immediately becomes situated transcendentally and therefore he has no need of being initiated with sacred thread, but Guru Maharaj introduced this sacred thread because a Vaisnava was being mistaken as belonging to the material caste. To accept a Vaisnava in material caste system is hellish consideration (naraki buddhi). Therefore, to save the general populace from being offender to a Vaisnava, He persistently introduced this sacred thread ceremony and we must follow His footsteps.
Regarding Dr. Sen's grandson's theory of species, if they are species-—the species horse is a kind of species; it draws a cart. The ass is another kind of species; he carries load. So ass is never engaged for drawing a cart. If brahmanas are a species and vaisya and sudra are other species, why do we see that sometimes a "brahmana" does a sudra's work? We have got many negro disciples and they are worshiping the Deity; so why they should not worship the Deity? Krsna says He accepts the service even from the papayoni, those who have taken impious births.
Actually Krsna does not say that caste is determined according to species, but according to the quality of work the divisions of society are made. Narada says one must be judged according to his qualification, even if he is in a different class or species, still he should be accepted according to the qualities which he exhibits i.e., brahmana, etc. Sridhar Swami says birth is not so much important as quality. (You have very wrongly remembered something about Sridhar Swami's view.) In Srimad-Bhagavatam it is said that if one is Vaisnava, immediately he becomes qualified for executing Vedic rites. About this verse, Srila Jiva Goswami remarks that the brahmana awaits the sacred thread ceremony, but a Vaisnava is qualified to execute the Vedic rites without waiting for the sacred ceremony.
The real fact is that because of non-observance of the Garvodhan sanskara in this age, there are no real brahmanas by birth at all and even they cannot be called as dvijabandhus properly because there has been no such observance for long time. Kalau sudra sambhava. The claim of brahmanism by birthright is a false display of material situation only. It is our duty therefore to train all kinds of men up to the standard of qualified brahmanas, initiating them as such by qualification in accordance with the above authorities, so that they may go on progressively unhindered in their march back to home, back to Godhead. This system introduced by my Guru Maharaj is a chance for all the members of the society, scientifically based and applied, apart from the exploitative sentiment of birthright "caste" system, to become actually situated on the transcendental platform.
The literal meaning of the term "brahmana" is one who is "brahmabhuta" or on the theoretical stage of brahmajnan. Since it is that one progresses from the stage of brahmajnan to the stage of knowledge of Paramatma and then to knowledge of Bhagavan, one who has come to the first stage, brahmajnan, is automatically a brahmana fully qualified as such. So for a Vaisnava, who has come to the highest stage of knowing Bhagavan, naturally he has already established his qualification as a brahmana.
Hope this will meet you in good health.
Your ever well-wisher,