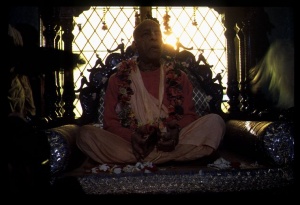 Prabhupāda: There is a verse in the Śrīmad-Bhāgavatam:

Etāvaj janma-sāphalyam. In order to make our life successful, dehinām iha dehiṣu. There are many embodied souls, 8,400,000s of species of life. Out of that, this civilized form of life, especially those who are followers of Vedic regulations, they are called the Āryans, or the advanced civilized persons. So it is obtained after many, many evolutionary process. Bahunam janmanam ante (BG 7.19). Labdhvā sudur . . . sudurlabhaṁ idam bahūnāṁ janmanām ante.

So dehinām iha dehiṣu, of all the embodied souls, this embodied soul, this human form of life, is meant for liberation. We are entangled in this chain of repeated birth and death, old age and disease, but we are not yet fed up. We think that, "All right, let us go on like this." But that is not actually advancement of knowledge. That is ignorance. There is a way to stop this repetition of birth, death, old age and disease. Therefore in this age, in this life especially, we should try to get out of this entanglement.

That is the special function of this human form of life. Dehinām iha dehiṣu. There are many dehīs. Dehīs means one who accepts this material body, he is called dehī. In the Bhagavad-gītā also it is said, kaumāraṁ yauvanam jara, tathā dehāntara-prāptiḥ dhīras tatra na muhyati (BG 2.13). Dehinām iha dehiṣu. So dehī means I am not this body, but I have accepted this body. Just like we accept a kind of dress, similarly, according to my desire, according to my karma, I have accepted a certain type of body, and according to that body, I am subject to different types of pains and pleasures. This is going on.

Therefore Bhāgavata says, especially in this body, it is the duty of everyone, śreya ācaraṇam. There are two words in the Vedic literature—śreya and preya. Preya means . . . just like ordinarily everyone is engaged in some sort of duty for sense gratification. Everyone is working very hard to satisfy the senses according to his standard of desire. So that is called preya, immediate benefit.

But besides this preya, there is another departmental activities, which is śreya. Just like children, they like to play. That is preya. But his guardians are anxious that the child may not be spoiled; he may be educated for his future life. That is preya . . . that is śreya. So Bhāgavata says that in this life, we should not be after preya, immediate benefit or immediate object of sense gratification. We should be thoughtful, "What I am? Why I am put into these material conditions of life, and what is the way to get out of it?" That is śreya. Śreya ācaraṇam.

So people should be engaged, in the human form of life, for activities of ultimate goal of life, and that is Kṛṣṇa or Viṣṇu. That we do not know. Na te viduḥ svārtha-gatiṁ hi viṣṇum (SB 7.5.31). Being captivated by the external energy, māyā, we have forgotten our interest. We are working for a different interest. That is preya, not for śreya. The śreya is Viṣṇu or Kṛṣṇa.

So I do not wish to take much of your time; you are all busy men, and I thank you very much that you have come. And we require your cooperation, prāṇair arthair dhiyā vācā (SB 10.22.35). Somebody should dedicate his life for this great movement, Kṛṣṇa consciousness. So these American boys, European boys, and there are some Indians also, they have dedicated their life for this purpose—to spread Kṛṣṇa consciousness. Similarly, if one cannot dedicate his life, then he should dedicate his money as far as possible.

Kṛṣṇa is fulfilling all your desires. And don't you like to give Him some tax? (laughter)

Kṛṣṇa, not only He's supplying, He's also begging. Just like He became a beggar to Bali Mahārāja. Vāmanadeva. Bali Mahārāja conquered the three worlds, and the all the demigods became very much perturbed. So Kṛṣṇa as Vāmanadeva went to Bali Mahārāja as a beggar, "Mahārāja, you are very charitable. Will you kindly give Me three feet land?"

So Kṛṣṇa, although He is the maintainer of everyone, sometimes He takes the part of a beggar. He's not beggar, but He begs to benefit the, I mean, the charitable. Who is giving in charity, he is benefited. Just like Bali Mahārāja, he gave everything to Vāmanadeva. Sarvātma-snapanam. There are different devotees. Out of these nine kinds of devotional service:

So Bali Mahārāja took part, he cultivated ātma-nivedanam, giving everything to Kṛṣṇa, whatever he had.

So, suppose one cannot dedicate his life or he has no money, then he can give us some intelligence that, "If you go to such-and-such person, or if you do like this, if you make your plan like this for pushing your Kṛṣṇa consciousness . . ." that is also service. Intelligence. And if he has no money, no intelligence and cannot dedicate his life, then he can give his words.

What is that? That word is, that Kṛṣṇa says, sarva-dharmān parityajya mām ekaṁ śaraṇaṁ vraja (BG 18.66). "So I have come to you, sir, to tell you that you surrender to Kṛṣṇa. Please surrender to Kṛṣṇa." Words. There is no expenditure. But you can say . . . or you can say: "Please chant Hare Kṛṣṇa." I think it is very easy. There is no expenditure, there is no loss. So śāstra gives us indication that prāṇair arthair dhiyā vācā śreya-ācaraṇaṁ sadā.

So I am so much obliged to you that you are trying your best to push this movement, and at the same time I must say that this movement is very, very important. This is the life-giving movement to the human society. That's a fact. It is not a bogus, manufactured, concocted movement. It is authorized.

Kṛṣṇa says, sarva-dharmān parityajya mām ekaṁ śaraṇaṁ vraja (BG 18.66). And we are teaching this philosophy throughout the whole world, and actually from all parts of the world we are getting devotees who are fully surrendered to Kṛṣṇa. (break) (end)