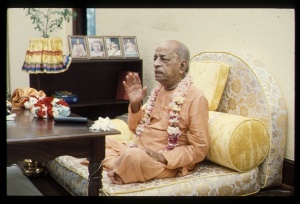 Pradyumna: Translation: "I was very much attached to those sages. I was gentle in behavior, and all my sins were eradicated in their service. In my heart I had strong faith in them. I had subjugated the senses, and I was strictly following them with body and mind."

So the qualification of the guru is described in the previous verse.

The guru must be mahātmā and muni. Muni means thoughtful, philosopher. Not foolish rascal, manufacturing some philosophy. And mahātmabhiḥ: not only self-realized, but by his character, by his behavior, by his understanding, he must be a mahātmā. What is that mahātmā? There are so many mahātmās simply by changing the dress. No. Not that kind of mahātmā. Our Bhaktivinoda Ṭhākura has sung a song, eita eka kalir celā: "Here is a disciple of Kali." What is that? Nāke tilaka galai mālā. "He has got tilaka . . ." Nata nara nāke tilaka galai mālā. He sings that sahaja bhajana kache namu saṅge laiyā pare dala. Bhaktivinoda Ṭhākura sings that "He's dressed like a bābājī. He has shaven his head, and has got tilaka and kaṇṭhī. But he has got at least half a dozen women, and that is his bhajana." So not that . . . that is not mahātmā. That is durātmā, a cheating . . . of course, in this Kali-yuga . . . therefore Bhaktivinoda Ṭhākura says, eita eka kalir celā. Kalir celā means the disciple of Kali. Dressed like a sādhu or Vaiṣṇava, but within, all rubbish things. That will not help us. He must be mahātmā real mahātmā. We want guru like that. Then it will be a . . . we must be also qualified, and guru also qualified. Therefore it is said in the Hari-bhakti-vilāsa that one year should be taken to study one another, the guru and the disciple. The guru also will see whether the person is fit to become a disciple, and the disciple also will see, "Whether this gentleman can become my guru."

Kṛṣṇa says, Vāsudeva . . . when Kṛṣṇa is in the Battlefield of Kurukṣetra, He's Vāsudeva. Kṛṣṇa does not go away from Vṛndāvana. But when He has got other business to do, He does it as Vāsudeva. Vāsudeva is in Mathurā. Vāsudeva is in Dvārakā. But original Kṛṣṇa is in Vṛndāvana. But that does not mean that this Vāsudeva is different from Kṛṣṇa. The foolish person, who cannot study, who does not know what is Vāsudeva, what is Aniruddha, what is Pradyumna, the, the Saṅkarṣaṇa . . . these are all expansion of Kṛṣṇa. They are not different from Kṛṣṇa, but still, They are not original Kṛṣṇa. There is no . . . it is not that Vāsudeva has got less power than Kṛṣṇa. They are equally powerful. Advaitam acyutam . . . advaita. They are not different. Acyutam anādim ananta-rūpam (Bs. 5.33). But the difference is that the . . . several times I explained that one candle, you lit up another candle, you lit up another candle, you lit up another, another, millions. So all the candles are of the same power, so far candlepower is concerned, but still, you have to say: "This is the first candle, this is the second candle, this is third candle, this is the fourth candle," like that. Not that because the second candle is lit up from the first candle, therefore second candle is less powerful than the first candle. No, that is not. That is called advaya-jñāna.

Advaitam acyutam. Advaitam acyutam ananta-rūpam. Kṛṣṇa's ananta-rūpam does not make any difference. There is no difference between Rāmacandra and Kṛṣṇa. Rāmādi-mūrtiṣu kalā-niyamena tiṣṭhan (Bs. 5.39). Kṛṣṇa is always . . . when we say "Kṛṣṇa"—Kṛṣṇa with all His expansions, Viṣṇu expansions. So either you worship Rāma or Kṛṣṇa, it is the same. Or Viṣṇu. There is no difference. Therefore advaitam acyutam anādim ananta-rūpam ādyam (Bs. 5.33). But still, Kṛṣṇa is the ādyam, original. Ādyam purāṇa-puruṣaṁ nava-yauvanaṁ ca. Although He is ādyam, purāṇa-puruṣam, the oldest personality, still, nava-yauvanaṁ ca, always young. You have never seen Kṛṣṇa's photograph as old man. No. When He was charioteer of Arjuna, He was great-grandfather at that time. His grandson had sons. He's old man. But you see, just a young man of twenty years old. That is Kṛṣṇa. Nava-yauvanaṁ ca. Ādyaṁ purāṇa-puruṣaṁ nava-yauvanaṁ ca. And these rascals, they try to understand Kṛṣṇa. Kṛṣṇa personally says that:

So therefore, how to understand Kṛṣṇa? That is stated by Kṛṣṇa Himself: after many, many births struggling to understand Kṛṣṇa. Bahūnāṁ janmanām ante jñānavān (BG 7.19). Not foolish person. Foolish person cannot understand. But even jñānavān, who is wise, perfectly wise, learned scholar, such person, even after many, many births struggling to understand Kṛṣṇa . . . so that is mahātmā, one who has understood Kṛṣṇa. He is mahātmā. One who does not understand Kṛṣṇa or verifies himself as Kṛṣṇa, he's durātmā. He's not mahātmā. He's a rascal. Mahātmā is that person who has understood Kṛṣṇa, that vāsudevaḥ sarvam iti (BG 7.19): "Kṛṣṇa, Vāsudeva, is the cause of all causes." Īśvaraḥ paramaḥ kṛṣṇaḥ (Bs. 5.1). One who has understood this perfectly, that the Supreme Controller, īśvara . . . īśvara means controller. And not only controller, but Supreme Controller. Controller, we are; every one of us are controller. Just like I am also controlling a few of my disciples—or hundred or thousand. But Kṛṣṇa is controller of millions, millions upon millions and millions upon . . . all universes. Sarva-loka-maheśvaram (BG 5.29). Simply to become controller does not become . . . yes, that is also īśvara. You can say. But there is parameśvara.

These words are used in the Vedic language: īśvara, parameśvara; ātmā, paramātmā. So there is one Paramātmā. That Paramātmā is Kṛṣṇa. Ātmā, we are also ātmā, living being, and Kṛṣṇa is also living being. But not . . . we are not equal to Kṛṣṇa. Kṛṣṇa is the chief living being. Just like I am also living being; you are also living being. But you accept me as the chief of this institution. There must be one chief; otherwise there will be no management. It will be chaotic. So we are ātmā, and Kṛṣṇa is also ātmā, but He is Paramātmā. We are īśvara; Kṛṣṇa is also īśvara, but He's Parameśvara. Therefore we have named "Godhead" purposefully, not "God." We don't say: "Back to God." We say: "Back to Godhead." "Head" means the chief. Everyone can claim that, "I am God," because everyone has got some power, little power. But not the supreme power. That is Kṛṣṇa.

So when one understands Kṛṣṇa perfectly, he becomes mahātmā. Just try to understand. Not a politician. Not by changing dress, saffron-color cloth. No, that is not mahātmā. One who understands Kṛṣṇa perfectly well, he is mahātmā. Therefore here it is said, munibhir mahātmabhiḥ. The instruction was received from person, munibhiḥ, great philosophers. Not only philosopher, but mahātmā. Because one who has understood Kṛṣṇa perfectly . . . this is the qualification of guru. So that qualification, to attain, is not very difficult. But because we are rascals, we do not try to take the qualification. That qualification is very simple. One . . . who can understand Kṛṣṇa? Kṛṣṇa is not so cheap thing. He has said already that yatatām api siddhānāṁ kaścin vetti māṁ tattvataḥ (BG 7.3). So it not very easy. But it is very easy if you take the process, easiest process. What is that easiest process? That easiest process: you don't talk nonsense; you simply talk what Kṛṣṇa has said. That's all. And many times they give me very great credit that I have done wonderful. Yes, I have done wonderful. But what is the reason? Because I am not a rascal. I speak what Kṛṣṇa has spoken, that's all. Very easy. Everyone can do that. Not only I—any of you, you can do this. Simply speak what is . . . what Kṛṣṇa has said. That's all. Don't make addition, alteration. Then you become rascal. Immediately you become rascal.

So you don't want to . . . if you don't want to become a rascal—if you want to become a mahātmā—then you accept what Kṛṣṇa says and preach that. Kṛṣṇa says, mattaḥ parataraṁ nānyat (BG 7.7): "There is no more superior authority than Me." You say that. You say, vāsudevaḥ sarvam iti. "Here is . . . Kṛṣṇa is the cause." You understand or don't understand, if you simply pick up the words of Kṛṣṇa and talk like that, then you become mahātmā. There is no difficulty to become mahātmā. But these durātmās, the rascals, they talk differently from Kṛṣṇa. Therefore they are not mahātmās; they are all durātmā. Therefore the process is that if you want to make progress in Kṛṣṇa consciousness, then you have to find out a guru who is mahātmā. Ādau gurvāśrayam. That is the first business. Ādau, in the beginning, gurvāśrayam, to take shelter of a bona fide mahātmā guru. That is the Vedic instruction. Tad-vijñānārthaṁ sa gurum eva abhigacchet (MU 1.2.12). "Must," abhigacchet. This verb is used—"must." It is not, "Oh, I can do without guru." No, that is not possible. That is not possible. If you want to understand the transcendental science, spiritual science, you must approach. Gacchet. This, this form of verb used when there is the meaning "must." Tad-vijñānārthaṁ sa gurum eva abhigacchet, samit-pāṇiḥ śrotriyaṁ brahma-niṣṭham. And guru's qualification is brahma-niṣṭham. Brahma. And again this word. Brahman, and Kṛṣṇa is Para-brahman. Again this param. That Para-brahman has been said by Arjuna to Kṛṣṇa, paraṁ brahma paraṁ dhāma pavitraṁ paramaṁ bhavān (BG 10.12). Bhavān: "My dear Kṛṣṇa, You are Para-brahman." Pavitraṁ paramaṁ bhavān.

So the process is that if you want to make any progress . . . just like Nārada Muni. He made immediately progress simply by associating with the mahātmās only for four months. Why? That is explained in the next verse. What is that? Tasyaivaṁ me anuraktasya. "I became attached to them. I became a lover of the mahātmās." Anuraktasya praśritasya. "I became obedient." Not disobedient. Guror avajñāḥ, that is great offense. If you become disobedient to guru, then your business is finished. These are the qualification. Me anuraktasya praśritasya . . . and hatainasaḥ. Hata enasaḥ. Means "All my sinful activities stopped." Nobody can understand the bona fide guru or Kṛṣṇa unless he is free from sinful life. Therefore we have to accept this principle: no illicit sex, no gambling, no, I mean to say, intoxication, no meat-eating. If you follow these four principles, then you become hatainasaḥ. Hata enasaḥ. Your sinful life stopped. So hatainasaḥ śraddadhānasya. Śraddadhāna means with faith and obedience. Not that blindly. Śraddadhānasya bālasya. And although he was a boy, but he got this qualification. Bālasya dānta, silent, no more playing. Anucarasya. Anucara means following. These are the qualification. If you become qualified with these qualities . . . what is that? Anurakta, means attached, obedient, no sinful activities, and faithful, and not disturbing, dānta, and follower. And if the guru is mahātmā and if you are qualified with these qualification, then the result will be there. Immediately.

Prabhupāda: See. So where is the difficulty? There is no difficulty. The difficulty is the rascals will not do it, and the so-called durātmās, they are passing on as mahātmās, and so-called disciples are passing as disciples. Therefore the transaction is imperfect. Things are not coming out. But if the transaction is perfect from both the sides—from the disciple's side and guru's side—then Kṛṣṇa consciousness is very, very easy.