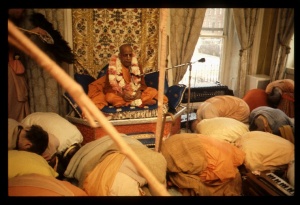 Amogha: This is their temple. They sit here and they pray. The priest sits on the, platform there, all, and offers prayers. There's a chair on the top, apparently god should be sitting.

(Indonesian music) (welcome speech in Indonesian in the background, being translated into English)

Amogha: Not yet finished

So I shall sing Jaya Rādhā-Mādhava. You can play with me?

So this Gāyatrī mantra is also mentioned in the beginning of Śrīmad-Bhāgavatam. In the beginning of Śrīmad-Bhāgavatam there is the statement, satyaṁ paraṁ dhīmahi (SB 1.1.1). Satyaṁ paraṁ dhīmahi. This dhīmahi mantra is in reference to the Gāyatrī. So we have got very intimate relationship. You have uttered the name of Puṇḍarīkākṣam, Nārāyaṇa, these are very known terms in the Bhāgavatam system. Śrīpāda Śaṅkarācārya has mentioned about Nārāyaṇa, nārāyaṇa parā avyaktāt. Nārāyaṇa is the Personality of Godhead beyond this material world. Nārāyaṇa is not the person of this material world.

So we are preaching the teachings of Bhagavad-gītā all over the world. So we invite you also to join this movement. You have already the sense of Vedic culture. Now, if you cooperate with us fully, we can develop a very nice cultural movement here also. The problem of birth, death, old age and disease is for everyone. But, on account of their material association, they do not take this problem very seriously. So one who does not give any importance to these problems, he is no better than animals. The problems of birth, death, old age and disease are there in the animals, as well as in human society. But the animals cannot make a solution, but the human being can make a solution. And to make the solution of these problems, there are the Vedic literatures.

So I think that you ladies and gentlemen here should take very serious account for this movement and join us. I shall invite some of your leading persons to meet me today or tomorrow, because tomorrow I shall be going. And if you are serious, we can preview some plan how we can cooperate. So you have got nice place; combinedly we can develop it into very nice center for spiritual culture. And that cultural movement will be interested for everyone in the world. Even those who were not aware of the Vedic culture, they're also joining and taking part in this movement. So my earnest request is that you should seriously think over the matter and join with this Kṛṣṇa consciousness.

Guest: And we from the Hindu side, Indonesia, we thank His Divine Grace for giving us advice and some encouragements. We are . . . (indistinct) . . . and some of us will try to come to see His Divine Grace to talk about this matter, and we will take it further.

Devotee: . . . talk, Prabhupāda. They listened, too. I was watching. They were all listening very carefully.

Amogha: In this type of temple and culture is prominent in that island of Bali. Many, many people. Here there are just a few, in Jakarta.

Prabhupāda: So we have to introduce this . . . (indistinct) . . . and if they give place, immediately take it.

Amogha: We have it. We'll take. It's very close to the man's house who built this temple, the man who was speaking in Indonesian. He gave us the house. Over a month ago they offered it to us.

Prabhupāda: So can take it.

Amogha: Before, we were coming every Saturday here to teach their children, just kīrtana and some stories.

(break) The children of that man, when I first came there and I was saying "Hare Kṛṣṇa," they started saying "Bhīma," "Arjuna," "Yudhiṣṭhira," like this. They know many stories. Of course, many stories are wrongly told, but they have some familiarity with Vedic knowledge, a little.

They have paintings also of Kṛṣṇa with the gopīs, stealing their clothes, Kṛṣṇa and Arjuna on the chariot. But they don't know how to present Kṛṣṇa as He is in His original form. They make Him more like a man because they don't know. But it's a basis.

Devotee: . . . nice. Maybe we can do that in some of our temples in India: playing maṅgala āratika over the loudspeaker.

Devotee: I remember in Allahabad they used to have some camps that were doing that every morning.

Śrutakīrti: Yeah. Be heard all around.