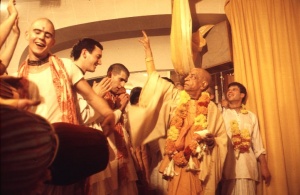 40.
In the clear autumn sky the twinkling stars appear brighter and brighter, just like a transcendentalist clear vision of the purpose of the Vedas.

The Lord says that in the Vedas it is mentioned that there are two kinds of living beings, called the fallible and the infallible. Those living beings who are materially encaged are all fallible, whereas those who are not conditioned and who are eternally situated in the spiritual realm are called akṣara, or infallible. The Lord then says,

"Besides these innumerable fallible and infallible living beings there is another, superior personality, known as the Paramātmā. He pervades all the three worlds and exists as the supreme controller.

"And because I [Lord Śrī Kṛṣṇa] am transcendental to all of them, even those who are infallible, I am known in all the Vedas and histories [the Purāṇas, Mahābhārata, Rāmāyaṇa, etc.] as the Absolute Supreme Personality of Godhead." (15.17-18)

The import of the Vedas is still more explicitly explained in Śrīmad-Bhāgavatam. The conclusion of the Vedic literatures is that Lord Śrī Kṛṣṇa is the primeval Lord and the cause of all causes. He has His eternal two-armed form as Śyāmasundara, with features exactly like those of a most beautiful young man, and that is the sum and substance of the Vedas concerning God. God is one, but the living entities, including both the liberated and the conditioned, are many and have many different grades of positions. The living entities are never equal to God, but as parts and parcels of the Lord they are eternally His servitors. As long as the living entities are situated normally as His servitors they are happy; otherwise they are always unhappy. That is the Vedic conclusion.