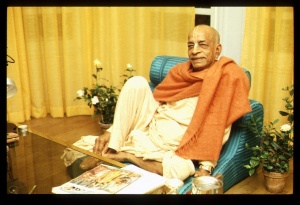 33.
There are waterfalls flowing from the hills of the forest, but sometimes water does not flow from them. So the waterfalls are not like ordinary rainfall. They are compared to great reformers, who speak or do not speak, as the time requires.

There are two different kinds of religious preachers. One of them is called the professional preacher, and the other is called the ācārya. The professional preachers are like the rainfall from the sky, but the ācāryas are like waterfalls. The professional traders in Bhāgavatam and Rāmāyaṇa will speak from the portion of the scripture that will appeal to the mundane senses of the audience. For example, the professional Bhāgavatam reciter will generally speak on the subject of rāsa-līlā, which appears to the layman to be something like the dealings of ordinary men and women. Thus the professional reciters earn money from their so-called admirers. But an ācārya will never speak on rāsa-līlā to the general mass of people. The rāsa-līlā chapters of the Bhāgavatam are the most confidential part of the scripture, and they are meant for advanced students of spiritual realization. In the Bhāgavatam there are twelve cantos, and the rāsa-līlā is in the tenth. So before one comes to the Tenth Canto, the Bhāgavatam tries to convince him of the transcendental nature of the Absolute Truth. Unless one has grasped the spiritual status of the Supreme Personality of Godhead, one is sure to accept Him as an ordinary man and thereby commit offenses at His lotus feet by so many unwanted activities.

The ācārya is he who knows the scriptures well and teaches his disciples in terms of the disciple's capacity to understand and advance in spiritual realization. Therefore he sometimes speaks and sometimes does not speak. The holy messages of Godhead have to be received from the realized soul, and not from the professional man. Although rainwater and the waterfalls are the same, the water from the waterfalls has a different effect than ordinary rainwater. One should not accept messages from the professional men, as one should not accept milk touched by the tongue of a serpent. Milk is good, but as soon as it is touched by the snake it becomes poisonous. The ācārya, therefore, is not a mercenary order-supplier like the professional reciter of scriptures.