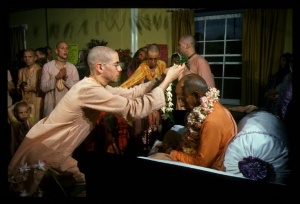 It is said that the Cupid, who is directly part and parcel of Lord Vāsudeva and who was formerly burned into ashes by the anger of Lord Śiva, took birth in the womb of Rukmiṇī, begotten by Kṛṣṇa. This Kāmadeva is the demigod of the heavenly planet especially meant for enthusing lusty desires. The Supreme Personality of Godhead, Kṛṣṇa, has many grades of parts and parcels, but the quadruple expansion of Kṛṣṇa—Vāsudeva, Saṅkarṣaṇa, Pradyumna, Aniruddha—They are directly on the Viṣṇu category. Therefore Kāma, or the Cupid demigod, although he was later on, after taking his birth in the womb of Rukmiṇī, was named as Pradyumna, he cannot be the Pradyumna of Viṣṇu category. He belongs to the category of jīva-tattva, but for special power in the category of demigods he was a part and parcel of the superprowess of Pradyumna. That is the verdict of the Gosvāmīns.

Therefore, when the Cupid was burned into ashes by the anger of Lord Śiva, he merged into the body of Vāsudeva, and now in order to get his body again, he was begotten by Lord Kṛṣṇa Himself, or he was directly released from His body in the womb of Rukmiṇī and then he was born the son of Kṛṣṇa, celebrated by the name Pradyumna. And because he was born by Lord Kṛṣṇa directly, his qualities were almost similar to that of Kṛṣṇa.

There was a demon of the name of Śambara. He was destined to be killed by this Pradyumna, and he knew it. Therefore, this Śambara demon, as soon as he understood that Pradyumna is born, he took the shape of an woman and from the maternity home, before the expiry of ten days of Pradyumna's birth, he took him away and threw him directly in the sea. But as it is said, "One who is protected by Kṛṣṇa, nobody can kill him, and one who is destined to be killed by Kṛṣṇa, nobody can protect him." On this principle, although Pradyumna was thrown in the sea water, immediately a big fish took charge of him by swallowing within his..., its belly. Later on this fish was caught by the net of a fisherman, and the fish was sold later on to the Śambara demon.

The kitchen department of the demon Śambara, there was a maidservant engaged whose name was Māyāvatī. This woman was formerly the wife of Cupid, and her name was Rati. When the fish was presented to the demon Śambara, it was taken charge by his cook for preparing a palatable preparation from fish. Demons or the rākṣasas are so called because they are accustomed to eat meat and fish and similar nonvegetarian diets. Similarly, other demons, although born of brāhmaṇa and kṣatriya fathers, still, demons like Rāvaṇa, Kaṁsa, Hiraṇyakaśipu, they used to take meat and flesh without any discrimination. This practice is still prevalent in India, because those who are meat-eaters and fish-eater, they are generally called the demons and rākṣasas.

So the cook in the kitchen, when he was cutting the fish, he found out the nice baby within the belly of the fish, and he immediately presented the baby in charge of Māyāvatī, who was engaged in the assistance of the kitchen affairs. This woman was surprised to see how such a nice baby could remain within the womb of a fish, and when she was perplexed with the idea, the great sage Nārada explained to her about the birth of Pradyumna and the baby being taken away by Śambara, later on thrown into the sea water, etc. In this way the whole story was disclosed to Māyāvatī, who was formerly Rati, the wife of Cupid.

Māyāvatī knew herself what she was previously—the wife of Cupid—and after her husband was burned into ashes by the wrath of Lord Śiva, she was always expecting of his coming back again in material form. This woman, although was engaged in the kitchen for cooking rice and dāl, when she got this nice baby and understood that he is Cupid, her husband, naturally she took charge of the baby and with great affection began to bathe him. Miraculously, the baby very swiftly grew up, and within a very short period became a beautiful young man, and any woman who happened to see him became captivated by his bodily beauty.

His eyes were just like the petals of lotus flowers, his arms were very long, up to the knees, and when Māyāvatī could understand that her former husband, Cupid, born as Pradyumna, has grown so nice young man, naturally she also gradually became captivated and lusty. She was smiling before him with effeminate attractiveness, expressing herself in various ways as if she was desiring sex unity with Pradyumna. He therefore inquired from the woman, "How it was possible that first of all you were affectionate like a mother, now you are expressing various symptoms like a lusty woman? What is the reason for such change of your habit?"

On hearing this statement from Pradyumna, the woman, Rati, replied, "My dear sir, you are the son of Lord Kṛṣṇa. Just after your birth, before expiry of ten days, you were stolen by the Śambara demon, later on thrown into the water and swallowed up by a fish. In this way you have come under my care. But actually, I am your wife in your former life as Cupid. Therefore, my manifestation of conjugal symptoms is not at all incompatible. This Śambara demon wanted to kill you, and he is endowed with various kinds of mystic powers. Therefore, before he again attempts to kill you, please kill him as soon as possible with your divine power. Since you were stolen away by this Śambarāsura, your mother, Rukmiṇī-devī, is staying in very grievous condition of life, like the cuckoo bird who has lost her babies. She is very much affectionate to you, and since you are taken away from her, she is living exactly like the cow aggrieved on account of loss of the calf."

Thus being empowered by his wife, immediately Pradyumna reached before the Śambara demon and challenged him for fighting with him. Pradyumna began to address him in very strong language, so that his temper might be agitated for fighting. On account of pinching words by Pradyumna towards the demon Śambara, he became too much insulted, exactly like the snake feels after being struck by one’s leg. A serpent cannot tolerate the kicking by another animal or man. Immediately serpent bites the opponent.

Therefore Śambara demon also, being struck by the words of Pradyumna as if he was kicked by him, immediately he took his club in the hand and appeared before Pradyumna to fight with him. With great anger he began to beat Pradyumna with his club exactly like the thunderbolt beats over the mountain, and the demon was also groaning exactly like the roaring sound of the cloud. Pradyumna, however, protected himself from the strike of the club of Śambarāsura by his own club, and later on he also stroke him very severely. In this way, the fighting between Śambarāsura and Pradyumna began very seriously.

Because his wife (within bracket) (Pradyumna), Māyāvatī, could travel in the outer space, Pradyumna directly reached his father’s capital, Dvārakā, by the airways. When both of them came just above the palace of Lord Kṛṣṇa, they began to come down as if the cloud is coming down along with the lightning. The inner section of the palace known as antaḥ-pura (put in brackets) (private apartments), Pradyumna and Māyāvatī saw that there were many womans in the palace and he sat down amongst them.

When the women saw Pradyumna, dressed in bluish garment, the arms very long, the eyes very beautiful and reddish, face covered with nice smiling, the whole body dressed with different kinds of jewelry and ornaments, with curling hair, in this way all the women present, they first of all could not recognize Pradyumna a different personality from Kṛṣṇa. So in the beginning they all in all became very much blushed on account of suddenly presence of Kṛṣṇa, and therefore they wanted to hide them in a different corner of the palace.

When the women, however, saw that in the personality of Pradyumna the characteristics of Kṛṣṇa are not all present, then they out of curiosity came back again to see him along with his wife, Māyāvatī. So all of them were conjecturing who was that beautiful person. Amongst the women there was Rukmiṇī-devī also, who was equally beautiful with her lotus-like eyes. Naturally, just after seeing Pradyumna, she remembered her own son. Immediately milk began to ooze out of her breast. This means Rukmiṇī-devī, just after seeing Pradyumna, immediately began to feel motherly affection.

She then began to conjecture, "Who is this beautiful young boy? He appears to be the most beautiful amongst the human beings. Who is that fortunate young woman able to give place to this nice boy in her womb and has thereof became his mother? And who is that young woman who has accompanied him? How they have become combined together? Just remembering my own son, who was stolen even from the maternity home, I can guess if he is living somewhere, he might have grown by this time like this boy."

In other words, simply by intuition Rukmiṇī could understand that Pradyumna was her own lost son. Rukmiṇī also could observe in the person of Pradyumna that he was resembling Lord Kṛṣṇa in every respect. She was therefore struck with wonder how he got all the symptoms of Kṛṣṇa. She therefore began to think more confidently that the boy must have been her own son grown up by this time because she felt too much affection for the boy, and as an auspicious sign of their meeting, her left arm was trembling.

When Rukmiṇī was conjecturing like that, at that very moment Lord Kṛṣṇa, along with His father and mother, Devakī and Vasudeva, appeared on the scene. Kṛṣṇa the Supreme Personality of Godhead could understand everything, still, on that situation He remained silent. But by the desire of Lord Śrī Kṛṣṇa, the great sage Nārada also appeared on the scene, and he began to disclose all the incidences: how Pradyumna was stolen from the maternity home and how he had grown up and had come there with his wife, Māyāvatī, who was formerly known as Rati, the wife of Cupid.

When everyone was informed about the mysterious disappearance of Pradyumna from the maternity home and how he had grown up, all of them became struck with wonder because all of them got back their dead son, almost being hopeless of his returning back. When factually all of them saw Pradyumna was present, they began to receive him with great delight. All members of the family, namely Devakī, Vasudeva, Lord Śrī Kṛṣṇa, Lord Balarāma, all other family women and Rukmiṇī, one after another began to embrace both Pradyumna and his wife, Māyāvatī. When this news was spread all over the city of Dvārakā, all the citizens astonishingly began to came to see lost Pradyumna with great anxiety, and all of them began to say, "The dead son has come back. What can be more pleasing than this incidence?"

Śrīla Śukadeva Gosvāmī has given explanation how in the beginning all the inmates of the palace, who were all mothers and stepmothers of Pradyumna, mistook him as Kṛṣṇa, and they were all blushful, infected by a desire of conjugal love. The explanation is that Pradyumna personally represented exactly like Kṛṣṇa, and he was factually the Cupid himself. There was no cause of astonishment, therefore, when the mothers of Pradyumna mistook like that. For other women, there was no astonishment at all. It is clear from this statement that Pradyumna’s bodily characteristics was so similar to Kṛṣṇa that he was mistaken even by his mothers.

Thus ends the Fifty-five Chapter Kṛṣṇa in the matter of "Pradyumna Begotten by Kṛṣṇa in Rukmiṇī."