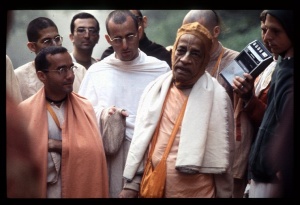 One who always sees all living entities as spiritual sparks, in quality one with the Lord, becomes a true knower of things. What, then, can be illusion or anxiety for him?

Except for the madhyama-adhikārī and uttama-adhikārī discussed above, no one can correctly see the spiritual position of a living being. The living entities are qualitatively one with the Supreme Lord, just as the sparks of a fire are qualitatively one with the fire. Yet sparks are not fire as far as quantity is concerned, for the quantity of heat and light present in the sparks is not equal to that in fire. The mahā-bhāgavata, the great devotee, sees oneness in the sense that he sees everything as the energy of the Supreme Lord. Since there is no difference between the energy and the energetic, there is the sense of oneness. Although from the analytical point of view heat and light are different from fire, there is no meaning to the word "fire" without heat and light. In synthesis, therefore, heat, light and fire are the same.

In this mantra the words ekatvam anupaśyataḥ indicate that one should see the unity of all living entities from the viewpoint of the revealed scriptures. The individual sparks of the supreme whole (the Lord) possess almost eighty percent of the known qualities of the whole, but they are not quantitatively equal to the Supreme Lord. These qualities are present in minute quantity, for the living entity is but a minute part and parcel of the Supreme Whole. To use another example, the quantity of salt present in a drop is never comparable to the quantity of salt present in the complete ocean, but the salt present in the drop is qualitatively equal in chemical composition to all the salt present in the ocean. If the individual living being were equal to the Supreme Lord both qualitatively and quantitatively, there would be no question of his being under the influence of the material energy. In the previous mantras it has already been discussed that no living being—not even the powerful demigods—can surpass the Supreme Being in any respect. Therefore ekatvam does not mean that a living being is equal in all respects to the Supreme Lord. It does, however, indicate that in a broader sense there is one interest, just as in a family the interest of all members is one, or in a nation the national interest is one, although there are many different individual citizens. Since the living entities are all members of the same supreme family, their interest and that of the Supreme Being are not different. Every living being is the son of the Supreme Being. As stated in the Bhagavad-gītā (7.5), all living creatures throughout the universe—including birds, reptiles, ants, aquatics, trees and so on—are emanations of the marginal potency of the Supreme Lord. Therefore all of them belong to the family of the Supreme Being. There is no clash of interest.

The spiritual entities are meant for enjoyment, as stated in the Vedānta-sūtra (1.1.12): ānanda-mayo 'bhyāsāt. By nature and constitution, every living being—including the Supreme Lord and each of His parts and parcels—is meant for eternal enjoyment. The living beings who are encaged in the material tabernacle are constantly seeking enjoyment, but they are seeking it on the wrong platform. Apart from the material platform is the spiritual platform, where the Supreme Being enjoys Himself with His innumerable associates. On that platform there is no trace of material qualities, and therefore that platform is called nirguṇa. On the nirguṇa platform there is never a clash over the object of enjoyment. Here in the material world there is always a clash between different individual beings because here the proper center of enjoyment is missed. The real center of enjoyment is the Supreme Lord, who is the center of the sublime and spiritual rāsa dance. We are all meant to join Him and enjoy life with one transcendental interest and without any clash. That is the highest platform of spiritual interest, and as soon as one realizes this perfect form of oneness, there can be no question of illusion (moha) or lamentation (śoka).

A godless civilization arises from illusion, and the result of such a civilization is lamentation. A godless civilization, such as that sponsored by the modern politicians, is always full of anxieties because it may be crushed at any moment. That is the law of nature. As stated in the Bhagavad-gītā (7.14), no one but those who surrender at the lotus feet of the Supreme Lord can surpass the stringent laws of nature. Thus if we wish to get rid of all sorts of illusion and anxiety and create unity out of all diverse interests, we must bring God into all our activities.

The results of our activities must be used to serve the interest of the Lord, and not for any other purpose. Only by serving the Lord's interest can we perceive the ātma-bhūta interest mentioned herein. The ātma-bhūta interest mentioned in this mantra and the brahma-bhūta (SB 4.30.20) interest mentioned in the Bhagavad-gītā (18.54) are one and the same. The supreme ātmā, or soul, is the Lord Himself, and the minute ātmā is the living entity. The supreme ātmā, or Paramātmā, alone maintains all the individual minute beings, for the Supreme Lord wants to derive pleasure out of their affection. The father extends himself through his children and maintains them in order to derive pleasure. If the children obey the father's will, family affairs will run smoothly, with one interest and a pleasing atmosphere. The same situation is transcendentally arranged in the absolute family of the Parabrahman, the Supreme Spirit.

The Parabrahman is as much a person as the individual entities. Neither the Lord nor the living entities are impersonal. Such transcendental personalities are full of transcendental bliss, knowledge and life eternal. That is the real position of spiritual existence, and as soon as one is fully cognizant of this transcendental position, he at once surrenders unto the lotus feet of the Supreme Being, Śrī Kṛṣṇa. But such a mahātmā, or great soul, is very rarely seen because such transcendental realization is achieved only after many, many births. Once it is attained, however, there is no longer any illusion or lamentation or the miseries of material existence or birth and death, which are all experienced in our present life. That is the information we get from this mantra of Śrī Īśopaniṣad.