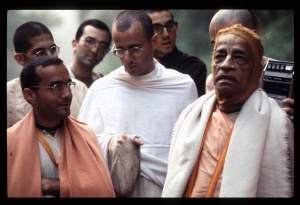 O best among the twice-born, it is therefore concluded that the highest perfection one can achieve by discharging the duties prescribed for one's own occupation according to caste divisions and orders of life is to please the Personality of Godhead. - Śrīmad-Bhāgavatam 1.2.13

Human society all over the world is divided into four castes and four orders of life. The four castes are the intelligent caste, the martial caste, the productive caste and the laborer caste. These castes are classified in terms of one's work and qualification and not by birth. Then again there are four orders of life, namely the student life, the householder's life, the retired life, and the devotional life. In the best interest of human society there must be such divisions of life; otherwise no social institution can grow in a healthy state. And in each and every one of the above-mentioned divisions of life, the aim must be to please the supreme authority of the Personality of Godhead.

This institutional function of human society is known as the system of varṇāśrama-dharma, which is quite natural for the civilized life. The varṇāśrama institution is constructed to enable one to realize the Absolute Truth. It is not for artificial domination of one division over another. When the aim of life, i.e., realization of the Absolute Truth, is missed by too much attachment for indriya-prīti, or sense gratification, as already discussed hereinbefore, the institution of the varṇāśrama is utilized by selfish men to pose an artificial predominance over the weaker section. In the Kali-yuga, or the age of quarrel, this artificial predominance is already current, but the saner section of the people know it well that the divisions of castes and orders of life are meant for smooth social intercourse and high-thinking self-realization and not for any other purpose.

Herein the statement of the Bhāgavatam is that the highest aim of life, or the highest perfection of the institution of varṇāśrama-dharma, is to cooperate jointly for the satisfaction of the Supreme Lord. This is confirmed in the Bhagavad-gītā (4.13).

Here Sūta Gosvāmī addresses his audience with the word dvija-śreṣṭhāḥ, "O best of the brāhmaṇas." This indicates that they are devotees of Kṛṣṇa and the best of learned scholars. In this age everyone is born a śūdra, a fourth-class man (janmanā jāyate śūdraḥ). By reformatory practices one can become a third-class man - a dvija (saṁskārād bhaved dvijaḥ). By cultivation of knowledge and culture, one becomes a second-class man, a vipra (veda-pāṭhād bhaved vipraḥ). But only one who knows Brahman is a first-class man, a brāhmaṇa (brahma jānātīti brāhmaṇa). And because the sages at Naimiṣāraṇya are the best of the brāhmaṇas, they know not only Brahman but Bhagavān, the Supreme Personality of Godhead.

The brahminical class is essential for actual human civilization, which begins with the social system of varṇāśrama-dharma, four varṇas and four āśramas. The four varṇas are the brāhmaṇas (the priests and intellectuals), the kṣatriyas (the warriors and administrators), the vaiśyas (the farmers and merchants), and the śūdras (the manual laborers). The four āśramas are the brahmacārīs (the celibate students), the gṛhasthas (the householders), the vānaprasthas (the retirees), and the sannyāsīs (the renunciants). Unless human society is scientifically organized according to this varṇāśrama system, it is animal society. It is not human society. And in animal society you cannot expect any intelligence or any sense of goodness or any idea of God. It is not possible.

The system of varṇāśrama is natural because it is a creation of God. Just as the body has four divisions - the brain, arms, belly, and legs - society also has four divisions - the brāhmaṇas, kṣatriyas, vaiśyas, and śūdras. This is natural. But if the head is cut off, what is the value of the body? It is a dead body. Similarly, at the present moment there is no brahminical culture in society, and so it is headless. There may be a very strong arm department (the kṣatriyas), a well-equipped economic department (the vaiśyas), and a numerous labor department (the śūdras), but because there is no head department (the brāhmaṇas), society is like a dead body. Therefore everyone is suffering.

In the Kṛṣṇa consciousness movement we are training brāhmaṇas so that human society may be saved. It is not that the other classes are unimportant. In the body the brain is very important, but the legs are also important because if your legs do not work and you cannot move your brain cannot help you. So there must be cooperation between all the bodily limbs. Although the brain is the most important part of the body, still the leg is required, the hand is required, the belly is required - everything is required. Similarly, all the social and spiritual classes in the varṇāśrama system are necessary for society to function properly.

So, we do not disregard any social division, but we say that everyone must work for the satisfaction of Kṛṣṇa: saṁsiddhir hari-toṣaṇam (SB 1.2.13). Then every member of society can achieve perfection. It doesn't matter what you do, but if you can satisfy Kṛṣṇa by your art and intelligence and education - in other words, by your work - then your life is perfect. We don't say, "Don't do your work." Do your work, but do it for Kṛṣṇa; then it is perfect. Otherwise, go to hell: śrama eva hi kevalam (SB 1.2.8).

Someone may claim, "Oh, I am a philosopher, and I am doing my duty."

"But do you know God, and do you serve God?"

Such nonsense will not help you. Suppose an ordinary man claims, "I am the President of the United States." Everyone will understand he is a crazy fellow. Similarly, when a rascal says "I am God," we should understand he is crazy.

You have to satisfy the Supreme Lord with your service, not try to imitate Him. In the Bhagavad-gītā Kṛṣṇa never advises that you should claim to be Him. No. He says, sarva-dharmān parityajya mām ekaṁ śaraṇaṁ vraja: (BG 18.66) "Come under My shelter exclusively." He never says, "Become equal with Me." That is nonsense. Kṛṣṇa will be satisfied with you when you surrender to Him and try to serve Him, not when you falsely claim, "I am Kṛṣṇa," or "Kṛṣṇa is now dead and I have become God," or "There is no God." Such rascaldom will never satisfy Kṛṣṇa.

So, the instruction of the Bhāgavatam is svanuṣṭhitasya dharmasya saṁsiddhir hari-toṣaṇam: (SB 1.2.13) "Your perfection will come when you perform your duties nicely for the satisfaction of Hari, or Kṛṣṇa." The activities in the four social and four spiritual orders of the varṇāśrama system may sometimes appear material, but when they are performed for the satisfaction of Kṛṣṇa, they are no longer material; they are spiritual. "Material" simply means forgetfulness of Kṛṣṇa, that's all. Otherwise, there is nothing material. Those who are not thoroughly Kṛṣṇa conscious distinguish between material and spiritual, but when you are fully Kṛṣṇa conscious you see the oneness of everything, ekatvam anupaśyataḥ (Īśopaniṣad 7). This means that you see how everything is related to Kṛṣṇa.

Kṛṣṇa is the Supreme, and everything is an emanation of His energy, which is variegated. A good example is the sun: from the sun emanates the sunshine, which is made up of two energies - heat and light. The whole material creation is based on this heat and light. If there were no heat and light from the sun, the trees would quickly become skeletons. So, while we can distinguish between the sun's heat energy and light energy, in a higher sense they are one because they are both part of the sunshine.

Similarly, two basic energies of Kṛṣṇa are acting in this world - His material energy and His spiritual energy. The material energy consists of earth, water, fire, air, ether, mind, intelligence, and ego, and the spiritual energy consists of the living entities (jīva-bhūtāṁ mahā-bāho yayedaṁ dhāryate jagat (BG 7.5)). So the material world is a combination of Kṛṣṇa's spiritual and material energies. And because 99.9% of the living entities here have forgotten God, here there is a distinction between the material and spiritual energies. But as soon as you advance in spiritual knowledge and become Kṛṣṇa conscious, you will no longer see anything as material; you will see that everything is spiritual: sarvaṁ khalv idaṁ brahma. As Śrī Caitanya Mahāprabhu says in the Caitanya-caritāmṛta (CC Madhya 8.274),

"A spiritually advanced, Kṛṣṇa conscious person sees all moving and nonmoving things, but he does not exactly see their forms. Rather, wherever he looks he sees the manifestation of His worshipable Lord." The vision of an atheist is just the opposite: even if he comes into the temple and sees the Deity form of Kṛṣṇa, he will simply see stone. But a spiritually advanced person who looks at the Deity will see Kṛṣṇa personally. When Caitanya Mahāprabhu entered the temple in Purī and saw the Deity of Jagannātha, He immediately fainted and exclaimed, "Here is My Kṛṣṇa!"

So, to overcome our forgetfulness of Kṛṣṇa, we should make satisfying Him our only business (saṁsiddhir hari-toṣanam (SB 1.2.13)). And if your aim is simply to satisfy Kṛṣṇa, then your life is perfect.