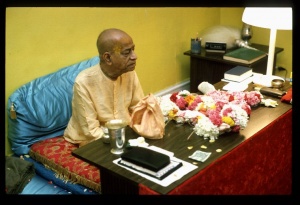 The Lord said, “Your statements are certainly getting better and better one after the other, but surpassing all of them is another transcendental mellow, and you can speak of that as the most sublime.” Rāmānanda Rāya then replied, “Conjugal attachment for Kṛṣṇa is the topmost position in love of Godhead.

In general, love of Godhead is devoid of the intimacy of ownership. In the case of love in servitude, there is a want of confidence. There is a want of increased affection in the fraternal relationship, and even when this affection increases in the parental relationship, there is nonetheless a want of complete freedom. However, when one becomes a conjugal lover of Kṛṣṇa, everything lacking in the other relationships is completely manifest. Love of Godhead lacks nothing in the conjugal stage. The summary of this verse is that parental love of Godhead is certainly higher than fraternal love and that conjugal love is higher yet. It was when Śrī Caitanya Mahāprabhu requested Rāmānanda Rāya to go further that he came to the point of the conjugal relationship, which is the highest perfectional stage of transcendental love.