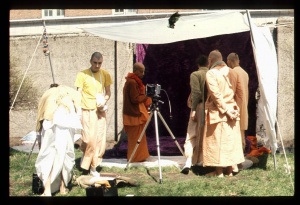 Rāmānanda Rāya continued, “According to the Bhagavad-gītā, ‘One who is thus transcendentally situated at once realizes the Supreme Brahman and becomes fully joyful. He never laments or desires to have anything. He is equally disposed toward every living entity. In that state he attains pure devotional service unto Me.’”

In this verse from the Bhagavad-gītā it is said that a person who accepts the theory of monism—being always engaged in empiric philosophical discussions about spiritual life—becomes joyful and is relieved from all material lamentation and hankering. At that stage, one is equipoised. He sees all living entities as spiritual beings. After attaining this elevated stage, one can attain pure devotional service. The conclusion is that devotional service mixed with ritualistic fruitive activity is inferior to spiritual service based on empiric philosophic discussion.