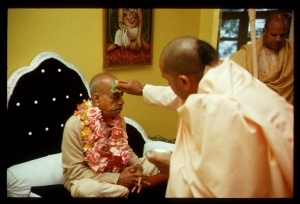 “You do not fear the Vedic injunctions stating that You should not associate with a śūdra. You were not contemptuous of my touch, although in the Vedas You are forbidden to associate with śūdras.

“O son of Pṛthā, those who take shelter in Me, though they be of lower birth—women, vaiśyas [merchants], as well as śūdras [workers]—can attain the supreme destination.”

The word pāpa-yonayaḥ means “born into a lower class.” According to the Vedic system of classification, women, vaisyas, and sudras belong to a lower social order. A low life means a life without Kṛṣṇa consciousness. High and low positions in society are calculated by considering a person’s Kṛṣṇa consciousness. A brāhmaṇa is considered to be on the highest platform because he knows Brahman, the Absolute Truth. The second caste, the kṣatriya caste, also know Brahman, but not as well as the brāhmaṇas. The vaiśyas and śūdras do not clearly understand God consciousness, but if they take to Kṛṣṇa consciousness by the mercy of Kṛṣṇa and the spiritual master, they do not remain in the lower castes (pāpa-yonayaḥ). It is clearly stated: te ’pi yānti parāṁ gatim.

Unless one has attained the highest standard of life, one cannot return home, back to Godhead. One may be a śūdra, vaiśya or woman, but if one is situated in the service of the Lord in Kṛṣṇa consciousness, one should not be considered strī, śūdra, vaiśya or lower than śūdra. Though a person may be from a lowborn family, if he is engaged in the Lord’s service he should never be considered to belong to a lowborn family. The Padma Purāṇa forbids, vīkṣate jāti-sāmānyāt sa yāti narakaṁ-dhruvam. A person goes to hell quickly when he considers a devotee of the Lord in terms of birth. Although Śrī Rāmānanda Rāya supposedly took birth in a śūdra family, he is not to be considered a śūdra, for he was a great advanced devotee. Indeed, he was on the transcendental platform. Śrī Caitanya Mahāprabhu therefore embraced him. Out of spiritual humility, Śrī Rāmānanda Rāya presented himself as a śūdra (rāja-sevī viṣayī śūdrādhama). Even though one may engage in government service or in any other pounds-shillings-pence business—in short, in materialistic life-he need only take to Kṛṣṇa consciousness. Kṛṣṇa consciousness is a very simple process. One need only chant the holy names of the Lord and strictly follow the principles forbidding sinful activity. In this way one can no longer be considered an untouchable, a viṣayī or a śūdra. One who is advanced in spiritual life should not associate with nondevotees—namely men in government service and men engaged in materialistic activity for sense gratification or in the service of others. Such men are considered viṣayī, materialistic. It is said:

“A person who is very seriously engaged in cultivating devotional service with a view to crossing the ocean of nescience and who has completely abandoned all material activities should never see a śūdra, a vaiśya or a woman.” (Śrī Caitanya-candrodaya-nāṭaka 8.23)