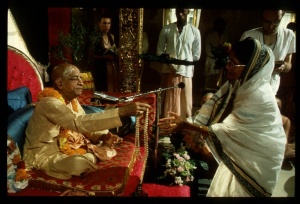 “Actually You are speaking through my mouth, and at the same time You are listening. This is very mysterious. Anyway, kindly hear the explanation of the process by which the goal can be attained.

Śrīla Sanātana Gosvāmī has advised us to hear about Kṛṣṇa from a Vaiṣṇava. He has explicitly forbidden us to hear from an avaiṣṇava.

Thus quoting from Padma Purāṇa, Śrīla Sanātana Gosvāmī warns that one should not hear anything about Kṛṣṇa from an avaiṣṇava, however great a mundane scholar he may be. Milk touched by the lips of a serpent has poisonous effects; similarly, talks about Kṛṣṇa given by an avaiṣṇava are also poisonous. However, because a Vaiṣṇava is surrendered to the Supreme Personality of Godhead, his talks are spiritually potent. In the Bhagavad-gītā (BG 10.10) the Supreme Lord says:

“To those who are constantly devoted to worshiping Me with love, I give the understanding by which they can come to Me.” When a pure Vaiṣṇava speaks, he speaks perfectly. How is this? His speech is managed by Kṛṣṇa Himself from within the heart. Śrīla Rāmānanda Rāya accepts this benediction from Śrī Caitanya Mahāprabhu; therefore he admits that whatever he was speaking was not derived from his own intelligence. Rather, everything was coming from Śrī Caitanya Mahāprabhu. According to the Bhagavad-gītā (BG 15.15):

“I am seated in everyone’s heart, and from Me come remembrance, knowledge and forgetfulness. By all the Vedas, I am to be known. Indeed I am the compiler of the Vedānta, and I am the knower of the Vedas.”

All intelligence emanates from the Supreme Personality of Godhead, the Supersoul within the heart of everyone. Nondevotees want to ask the Supreme Lord for sense gratification; therefore nondevotees come under the influence of māyā, the illusory energy. A devotee, however, is directed by the Supreme Personality of Godhead and comes under the influence of yogamāyā. Consequently there is a gulf of difference between statements made by a devotee and those made by a nondevotee.