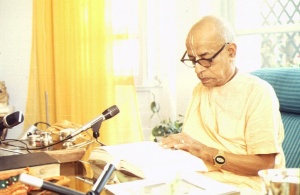 “In this Age of Kali there is no līlā-avatāra of the Supreme Personality of Godhead; therefore He is known as Triyuga. That is one of His holy names.”

A līlā-avatāra is an incarnation of the Lord who performs a variety of activities without making any special endeavor. He always has one pastime after another, all full of transcendental pleasure, and these pastimes are fully controlled by the Supreme Person. The Supreme Person is totally independent of all others in these pastimes. While teaching Sanātana Gosvāmī (CC Madhya 20.296-298), Śrī Caitanya Mahāprabhu pointed out that one cannot count the number of līlā-avatāras:

“However,” the Lord told Sanātana, “I shall explain the chief līlā-avatāras.”

Thus the Lord’s incarnations were enumerated, including Matsya, the fish incarnation; Kūrma, the tortoise; Lord Rāmacandra; Nṛsiṁhadeva; Vāmanadeva; and Varāha, the boar incarnation. Thus there are innumerable līlā-avatāras, and all of these exhibit wonderful pastimes. Lord Varāha, the boar incarnation, lifted the entire planet earth from the depths of the Garbhodaka Ocean. The tortoise incarnation, Lord Kūrma, became a pivot for the emulsification of the whole sea, and Lord Nṛsiṁhadeva appeared as half-man, half-lion. These are some of the wonderful and uncommon features of līlā-avatāras.