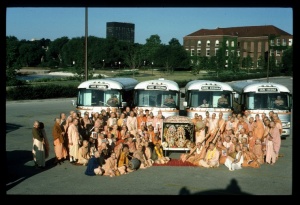 " 'When a person unreservedly takes shelter of the lotus feet of the Supreme Personality of Godhead, the unlimited, merciful Lord bestows His causeless mercy upon him. Thus he can pass over the insurmountable ocean of nescience. Those whose intelligence is fixed in the bodily conception, who think, "I am this body," are fit food for dogs and jackals. The Supreme Lord never bestows His mercy upon such people.' "

The Supreme Lord never bestows His benediction upon those fixed in the bodily conception. As Kṛṣṇa clearly states in the Bhagavad-gītā (18.66):

"Abandon all varieties of religion and just surrender unto Me. I shall deliver you from all sinful reactions. Do not fear."

In this verse that Caitanya Mahāprabhu has quoted from Śrīmad-Bhāgavatam (2.7.42), the meaning of Śrī Kṛṣṇa's statement is explained. Kṛṣṇa bestowed His causeless mercy upon Arjuna just to get him out of the bodily conception. This was done at the very beginning of the Second Chapter of the Bhagavad-gītā (2.13), where Kṛṣṇa says, dehino 'smin yathā dehe kaumāraṁ yauvanaṁ jarā. In this body, there is an owner, and one should not consider the body to be the self. This is the first instruction to be assimilated by a devotee. If one is under the bodily conception, he is unable to realize his true identity and engage in the loving devotional service of the Lord. Unless one comes to the transcendental position, he cannot expect the causeless mercy of the Supreme Lord, nor can he cross over the vast ocean of material nescience. This is also confirmed in the Bhagavad-gītā (7.14): mām eva ye prapadyante māyām etāṁ taranti te. Without surrendering unto the lotus feet of Kṛṣṇa, one cannot expect release from the clutches of māyā, the illusory energy. According to Śrīmad-Bhāgavatam (10.2.32), Māyāvādī sannyāsīs who falsely think of themselves as liberated from the clutches of māyā are called vimukta-māninaḥ. Actually, they are not liberated, but they think that they have become liberated and have become Nārāyaṇa Himself. Although they have apparently realized that they are not the material body but spirit soul, they nonetheless neglect the duty of the spirit soul, which is to render service to the Supreme Soul. Therefore their intelligence remains unsanctified. Unless one's intelligence is sanctified, one cannot apply it to understanding devotional service. Devotional service begins when the mind, intelligence and ego are completely purified. Māyāvādī sannyāsīs do not purify their intelligence, mind and ego, and consequently they cannot engage in the service of the Lord or expect the causeless mercy of the Lord. Although they rise to a very high position by executing severe austerities and penances, they still hover in the material world without the benediction of the lotus feet of the Lord. Sometimes they rise to the Brahman effulgence, but because their minds are not completely purified, they must return to material existence.

The karmīs are fully under the bodily conception of life, and the jñānīs, although theoretically understanding that they are not the body, also have no information about the lotus feet of the Lord because they overly stress impersonalism. Consequently both karmīs and jñānīs are unfit for receiving the mercy of the Lord and becoming devotees. Narottama dāsa Ṭhākura therefore says, karma-kāṇḍa jñāna-kāṇḍa, kevala viṣera bhāṇḍa: those who have taken to the process of karma-kāṇḍa (fruitive activity) and jñāna-kāṇḍa (speculation on the science of transcendence) have simply eaten from poisoned pots. They are condemned to remain in material existence life after life until they take shelter of the lotus feet of Kṛṣṇa. This is confirmed in Śrīmad Bhagavad-gītā (7.19):