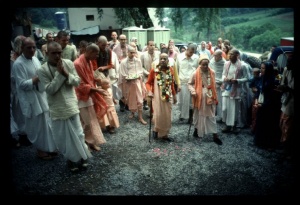 "The word 'Brahman' indicates the complete Supreme Personality of Godhead, who is Śrī Kṛṣṇa. That is the verdict of all Vedic literature.

When one has actually become wise through the study of Vedic literature, he surrenders unto Vāsudeva, Bhagavān Śrī Kṛṣṇa. This is also confirmed in Śrīmad-Bhāgavatam (1.2.7-8):

Understanding Vāsudeva is real knowledge. By engaging in the devotional service of Vāsudeva, Kṛṣṇa, one acquires perfect knowledge and Vedic understanding. Thus one becomes detached from the material world. This is the perfection of human life. Although one may perfectly follow religious rituals and ceremonies, he is simply wasting his time (śrama eva hi kevalam) if he does not attain this perfection.

Before the creation of the cosmic manifestation, the Supreme Personality of Godhead possessed His totally transcendental mind and eyes. That Supreme Personality of Godhead is Kṛṣṇa. A person may think that there is no direct statement about Kṛṣṇa in the Upaniṣads, but the fact is that the Vedic mantras cannot be understood by people with mundane senses. As stated in the Padma Purāṇa, ataḥ-śrī kṛṣṇa nāmādi na bhaved grāhyam indriyaiḥ: a person with mundane senses cannot fully understand the name, qualities, form and pastimes of Śrī Kṛṣṇa. The Purāṇas are therefore meant to explain and supplement Vedic knowledge. The great sages present the Purāṇas in order to make the Vedic mantras understandable for common men (strī-śūdra-dvija-bandhūnām). Considering that women, śūdras and dvija-bandhus (unworthy sons of the twice-born) cannot understand the Vedic hymns directly, Śrīla Vyāsadeva compiled the Mahābhārata. Actually, the Supreme Personality of Godhead is vedeṣu durlabham (untraceable in the Vedas), but when the Vedas are properly understood or when Vedic knowledge is received from devotees, one can understand that all Vedic knowledge leads to Śrī Kṛṣṇa.