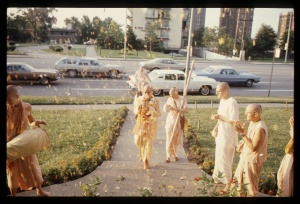 “Wherever there is an impersonal description in the Vedas, the Vedas mean to establish that everything belonging to the Supreme Personality of Godhead is transcendental and free of mundane characteristics.”

There are many impersonal statements about the Supreme Personality of Godhead. As stated in the Śvetāśvatara Upaniṣad (3.19):

Although the Supreme Lord is described as having no hands and legs, He nonetheless accepts all sacrificial offerings. He has no eyes, yet He sees everything. He has no ears, yet He hears everything. When it is stated that the Supreme Lord has no hands and legs, one should not think that He is impersonal. Rather, He has no mundane hands or legs like ours. “He has no eyes, yet He sees.” This means that He does not have mundane, limited eyes like ours. Rather, He has such eyes that He can see past, present and future, everywhere, in every corner of the universe and in every corner of the heart of every living entity. Thus the impersonal descriptions in the Vedas intend to deny mundane characteristics in the Supreme Lord. They do not intend to establish the Supreme Lord as impersonal.