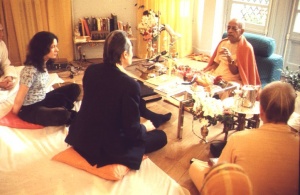 "You do not explain the direct meaning of the Brahma-sūtras. Indeed, it appears that your business is to cover their real meaning."

This is typical of all Māyāvādīs or atheists who interpret the meaning of Vedic literature in their own imaginative way. The real purpose of such foolish people is to impose the impersonalist conclusion on all Vedic literature. The Māyāvādī atheists also interpret the Bhagavad-gītā. In every verse of Śrīmad Bhagavad-gītā it is clearly stated that Kṛṣṇa is the Supreme Personality of Godhead. In every verse Vyāsadeva says, śrī-bhagavān uvāca, "the Supreme Personality of Godhead said," or "the Blessed Lord said." It is clearly stated that the Blessed Lord is the Supreme Person, but Māyāvādī atheists still try to prove that the Absolute Truth is impersonal. In order to present their false, imaginary meanings, they must adopt so much word jugglery and grammatical interpretation that they finally become ludicrous. Therefore Śrī Caitanya Mahāprabhu remarked that no one should hear the Māyāvādī commentaries or purports to any Vedic literature.