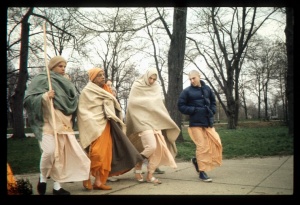 The inhabitants of the village brought to the Deity of Gopāla as much food grains, ghee, yogurt and milk as they had in their village.

Anna, ghṛta, dadhi and dugdha are food grains, ghee, yogurt and milk. Actually these are the basis of all food. Vegetables and fruits are subsidiary. Hundreds and thousands of preparations can be made out of grains, vegetables, ghee, milk and yogurt. The food offered to Gopāla in the Annakūṭa ceremony contained only these five ingredients. Only demoniac people are attracted to other types of food, which we will not even mention in this connection. We should understand that in order to prepare nutritious food, we require only grains, ghee, yogurt and milk. We cannot offer anything else to the Deity. The Vaiṣṇava, the perfect human being, does not accept anything not offered to the Deity. People are often frustrated with national food policies, but from the Vedic scriptures we find that if there are sufficient cows and grains, the entire food problem is solved. The vaiśyas (people engaged in agriculture and commerce) are therefore recommended in the Bhagavad-gītā to produce grains and give protection to cows. Cows are the most important animal because they produce the miracle food, milk, from which we can prepare ghee and yogurt.

The perfection of human civilization depends on Kṛṣṇa consciousness, which recommends Deity worship. Preparations made from vegetables, grains, milk, ghee and yogurt are offered to the Deity and then distributed. Here we can see the difference between the East and the West. The people who came to see the Deity of Gopāla brought all kinds of food to offer the Deity. They brought all the food they had in stock, and they came before the Deity not only to accept prasāda for themselves but to distribute it to others. The Kṛṣṇa consciousness movement vigorously approves this practice of preparing food, offering it to the Deity and distributing it to the general population. This activity should be extended universally to stop sinful eating habits as well as other behavior befitting only demons. A demoniac civilization will never bring peace within the world. Since eating is the first necessity in human society, those engaged in solving the problems of preparing and distributing food should take lessons from Mādhavendra Purī and execute the Annakūṭa ceremony. When the people take to eating only prasāda offered to the Deity, all the demons will be turned into Vaiṣṇavas. When the people are Kṛṣṇa conscious, naturally the government will be so also. A Kṛṣṇa conscious man is always a very liberal well-wisher of everyone. When such men head the government, the people will certainly be sinless. They will no longer be disturbing demons. It is then and then only that a peaceful condition can prevail in society.