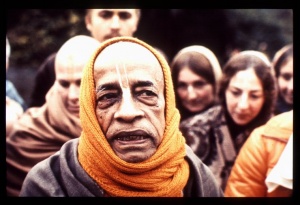 Hearing this invitation, Mādhavendra Purī came out and identified himself. The priest then delivered the pot of sweet rice and offered his obeisances, falling flat before him.

A brāhmaṇa is not supposed to offer his obeisances by falling flat before anyone because a brāhmaṇa is considered to be in the highest caste. However, when a brāhmaṇa sees a devotee, he offers his daṇḍavats. This brāhmaṇa priest did not ask Mādhavendra Purī whether he was a brāhmaṇa, but when he saw that Mādhavendra Purī was such a bona fide devotee that Kṛṣṇa would even steal for him, he immediately understood the position of the saint. As stated by Śrī Caitanya Mahāprabhu: kibā vipra, kibā nyāsī, śūdra kene naya yei kṛṣṇa-tattva-vettā, sei 'guru' haya. ([[CC Madhya 8.128 (1975)|Cc. Madhya 8.128) Had the brāhmaṇa priest been an ordinary brāhmaṇa, Gopīnātha would not have talked with him in a dream. Since the Deity spoke to both Mādhavendra Purī and the brāhmaṇa priest in dreams, practically speaking they were on the same platform. However, because Mādhavendra Purī was a senior sannyāsī Vaiṣṇava, a paramahaṁsa, the priest immediately fell flat before him and offered obeisances.