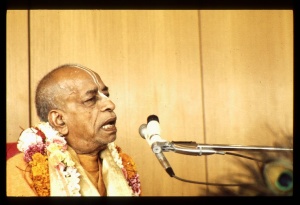 “ ‘I shall cross over the insurmountable ocean of nescience by being firmly fixed in the service of the lotus feet of Kṛṣṇa. This was approved by the previous ācāryas, who were fixed in firm devotion to the Lord, Paramātmā, the Supreme Personality of Godhead.’”

In connection with this verse, which is a quotation from Śrīmad-Bhāgavatam (SB 11.23.57), Śrīla Bhaktisiddhānta Sarasvatī Ṭhākura says that of the sixty-four items required for rendering devotional service, acceptance of the symbolic marks of sannyāsa is a regulative principle. If one accepts the sannyāsa order, his main business is to devote his life completely to the service of Mukunda, Kṛṣṇa. If one does not completely devote his mind and body to the service of the Lord, he does not actually become a sannyāsī. It is not simply a matter of changing dress. In Bhagavad-gītā (BG 6.1) it is also stated, anāśritaḥ karma-phalaṁ kāryaṁ karma karoti yaḥ/ sa sannyāsī ca yogī ca: one who works devotedly for the satisfaction of Kṛṣṇa is a 'sannyāsī. The dress is not sannyāsa, but the attitude of service to Kṛṣṇa is.

The word parātma-niṣṭhā means being a devotee of Lord Kṛṣṇa. Parātmā, the Supreme Person, is Kṛṣṇa. Īśvaraḥ paramaḥ kṛṣṇaḥ sac-cid-ānanda-vigrahaḥ (BS 5.1). Those who are completely dedicated to the lotus feet of Kṛṣṇa in service are actually sannyāsīs. As a matter of formality, the devotee accepts the sannyāsa dress as previous ācāryas did. He also accepts the three daṇḍas. Later Viṣṇu Svāmī considered that accepting the dress of a tri-daṇḍī was parātma-niṣṭhā. Therefore sincere devotees add another daṇḍa, the jīva-daṇḍa, to the three existing daṇḍas. The Vaiṣṇava sannyāsī is known as a tridaṇḍi-sannyāsī. The Māyāvādī sannyāsī accepts only one daṇḍa, not understanding the meaning of tri-daṇḍa. Later, many persons in the community of Śiva Svāmī gave up the ātma-niṣṭhā (devotional service) of the Lord and followed the path of Śaṅkarācārya. Instead of accepting 108 names, those in the Śiva Svāmī sampradāya follow the path of Śaṅkarācārya and accept the ten names of sannyāsa. Although Śrī Caitanya Mahāprabhu accepted the then-existing order of sannyāsa (namely eka-daṇḍa), He still recited a verse from Śrīmad-Bhāgavatam about the tridaṇḍa-sannyāsa accepted by the brāhmaṇa of Avantīpura. Indirectly He declared that within that eka-daṇḍa, one daṇḍa, four daṇḍas existed as one. Accepting ekadaṇḍa-sannyāsa without parātma-niṣṭhā (devotional service to Lord Kṛṣṇa) is not acceptable to Śrī Caitanya Mahāprabhu. In addition, according to the exact regulative principles, one should add the jīva-daṇḍa to the tri-daṇḍa. These four daṇḍas, bound together as one, are symbolic of unalloyed devotional service to the Lord. Because the ekadaṇḍi-sannyāsīs of the Māyāvāda school are not devoted to the service of Kṛṣṇa, they try to merge into the Brahman effulgence, which is a marginal position between material and spiritual existence. They accept this impersonal position as liberation. Māyāvādī sannyāsīs, not knowing that Śrī Caitanya Mahāprabhu was a tridaṇḍī, think of Caitanya Mahāprabhu as an ekadaṇḍi-sannyāsī. This is due to their vivarta, bewilderment. In Śrīmad-Bhāgavatam there is no such thing as an ekadaṇḍi-sannyāsī; indeed, the tridaṇḍi-sannyāsī is accepted as the symbolic representation of the sannyāsa order. By citing this verse from Śrīmad-Bhāgavatam, Śrī Caitanya Mahāprabhu accepted the sannyāsa order recommended in Śrīmad-Bhāgavatam. The Māyāvādī sannyāsīs, who are enamored of the external energy of the Lord, cannot understand the mind of Śrī Caitanya Mahāprabhu.

To date, all the devotees of Śrī Caitanya Mahāprabhu, following in His footsteps, accept the sannyāsa order and keep the sacred thread and tuft of unshaved hair. The ekadaṇḍi-sannyāsīs of the Māyāvādī school give up the sacred thread and do not keep any tuft of hair. Therefore they are unable to understand the purport of tridaṇḍa-sannyāsa, and as such they are not inclined to dedicate their lives to the service of Mukunda. They simply think of merging into the existence of Brahman because of their disgust with material existence. The ācāryas who advocate the daiva-varṇāśrama (the social order of cātur-varṇyam mentioned in the Bhagavad-gītā) do not accept the proposition of āsura-varṇāśrama, which maintains that the social order of varṇa is indicated by birth.

“One who can control the forces of speech, mind, anger, belly, tongue and genitals is known as a gosvāmī and is competent to accept disciples all over the world.” The followers of Śrī Caitanya Mahāprabhu never accepted the Māyāvāda order of sannyāsa, and for this they cannot be blamed. Śrī Caitanya Mahāprabhu accepted Śrīdhara Svāmī, who was a tridaṇḍi-sannyāsī, but the Māyāvādī sannyāsīs, not understanding Śrīdhara Svāmī, sometimes think that Śrīdhara Svāmī belonged to the Māyāvāda ekadaṇḍa-sannyāsa community. Actually this was not the case.