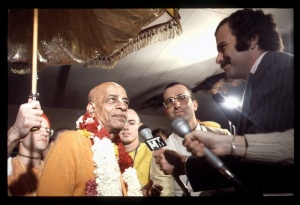 "Śrīla Vyāsadeva considered that whatever he had received from Nārada Muni as an explanation of oṁkāra he would elaborately explain in his book Śrīmad-Bhāgavatam as a commentary on the Brahma-sūtra.

The sound vibration oṁkāra is the root of Vedic knowledge. Oṁkāra is known as the mahā-vākya, or supreme sound. Whatever meaning is in the supreme sound oṁkāra is further understood in the Gāyatrī mantra. Again, this same meaning is explained in Śrīmad-Bhāgavatam in the four ślokas known as the catuḥ-ślokī, which begin with the words ahaṁ evāsam evāgre. The Lord says, "Only I existed before the creation." From this statement, four ślokas have been composed, and these are known as the catuḥ-ślokī (SB 2.9.33/34/35/36). In this way the Supreme Personality of Godhead informed Lord Brahmā about the purport of the catuḥ-ślokī. Again, Lord Brahmā explained this to Nārada Muni, and Nārada Muni explained it to Śrīla Vyāsadeva. This is the paramparā system, the disciplic succession. The import of Vedic knowledge, the original word praṇava, has been explained in Śrīmad-Bhāgavatam. The conclusion is that the Brahma-sūtra is explained in Śrīmad-Bhāgavatam.