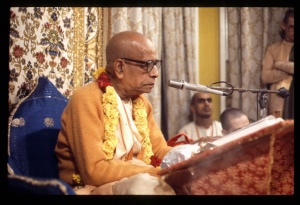 "'Dry arguments are inconclusive. A great personality whose opinion does not differ from others is not considered a great sage. Simply by studying the Vedas, which are variegated, one cannot come to the right path by which religious principles are understood. The solid truth of religious principles is hidden in the heart of an unadulterated, self-realized person. Consequently, as the śāstras confirm, one should accept whatever progressive path the mahājanas advocate.'

This is a verse spoken by Yudhiṣṭhira Mahārāja in the Mahābhārata, Vana-parva 313.117.