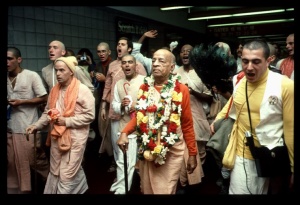 Earning his livelihood by selling dry wood, Subuddhi Rāya would live on only one paise's worth of fried chick-peas, and he would deposit whatever other paises he had with some merchant.

In those days there was no banking system like the one now found in Western countries. If one had excess money, he would deposit it with some merchant, usually a grocer. That was the banking system. Subuddhi Rāya would deposit his extra money with a mercantile man and spend it when necessary. When one is in the renounced order, saving money is not recommended. However, if one saves money for the service of the Lord or a Vaiṣṇava, that is accepted. These are the dealings of Subuddhi Rāya, who is one of the confidential devotees of Śrī Caitanya Mahāprabhu. Śrīla Rūpa Gosvāmī also followed this principle by spending fifty percent of his money in order to serve Kṛṣṇa through brāhmaṇas and Vaiṣṇavas. He gave twenty-five percent of his money to relatives, and twenty-five percent he deposited in the custody of a merchant. These are the approved methods recommended in Caitanya-caritāmṛta. Whether in the renounced order or in the gṛhastha order, a Vaiṣṇava should follow these principles set forth by the previous ācāryas.