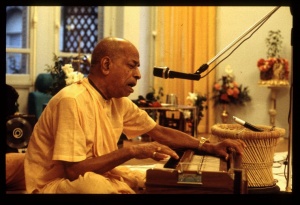 " 'Before the cosmic manifestation was created, the creative propensity was merged in His person. At that time all potencies and manifestations were preserved in the personality of the Supreme Lord. The Lord is the cause of all causes, and He is the all-pervading, self-sufficient person. Before the creation, He existed with His spiritual potency in the spiritual world, wherein various Vaikuṇṭha planets are manifest.'